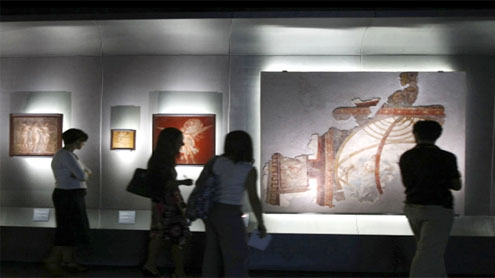 NEW DELHI: A life-size portrait of Emperor Jahangir, dating back to the 17th century, has become the most expensive Mughal painting sold at auction. The work, which went under the hammer at Bonhams Indian and Islamic Sale in London on Tuesday, fetched a king-size price — 1.4 million pounds (Rs 10.2 crore).Curators of the National Portrait Gallery, who had featured this work as a star exhibit in a show last year, billed it as the largest painting to come from the Mughal empire.Dating from 1617, Jahangir is opulently painted in gold and watercolour on a cotton canvas. He is seated on a European-style chair, with a halo around his head and balancing a globe in his right hand. These allude to his honorific name, Nur al-Din (‘Light of the Faith’) and to the name that he took on his accession to the throne, Jahangir, meaning ‘world-seizer’. Abu’l Hasan, the highest ranking painter of the time, has been suggested as the artist.

“This is one of the rarest 17th century painting ever to come to auction,” said Alice Bailey, head of Indian and Islamic Art at Bonhams. The auction house said the buyer was a Middle Eastern museum. The last time this picture came up at auction was in 1995 when it sold for 573,000.While the medium of watercolour and gold on cotton would have been familiar to Mughal artists, experts say the portrait’s scale and colouring derive from European oil painting. Large-scale European paintings were known at the Mughal court and Jahangir is reported to have displayed English portraits behind his throne at the New Year festival in 1616-17. -TOI