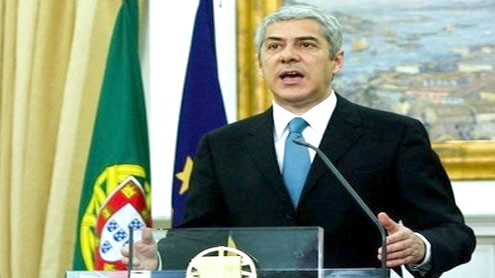 BRUSSELS: European finance ministers face a point of no return as they gather in Hungary on Thursday for talks derailed by Portugal’s sudden admission it needs an emergency bailout.An abrupt Lisbon U-turn, after weeks when the collapsed Portuguese government insisted it did not need the external financial aid experts deemed inevitable, changed radically the mood going into a supposedly informal meeting lasting until Saturday.Instead of pressure-free discussions on the long-term needs of the fiscally-challenged eurozone, relaxed analysis of bailout frontrunner Greece’s budgetary problems and political debate about what to ask of Ireland in exchange for a loosening of its repayment terms, ministers face a huge task trying to answer unforgiving markets.”Procrastination is no longer an option,” analyst Sony Kapoor told AFP after the news emerged overnight.After Portugal, “Europe has to arrest the spiral of bad news and inadequate action before it becomes a black hole, but there are no easy, obvious solutions any more,” the head of the Re-Define think tank said.”The opportunity for a clean Greek restructuring may have already passed,” Kapoor warned.

“It is now difficult to see any solution to the continuing problems in Greece that does not require at least some EU public sector transfers,” he noted.Meanwhile, “Ireland is making slow progress but its shoddy oversized banks continue to cast a shadow on an otherwise sound economy.”After Portugal, all eyes now go on Spain, a major European Union economy next in snipers’ sights.Outgoing Portuguese Prime Minister Jose Socrates said a bailout became inevitable when lawmakers rejected new austerity measures presented as the last-chance saloon.”I believe it is necessary to have recourse to the financing mechanisms which are available within the European context,” Finance Minister Fernando Teixeira dos Santos said in bombshell comments.Governments must now grapple with the size of loans required — Luxembourg Prime Minister Jean-Claude Juncker, who heads the Eurogroup of finance ministers, has suggested 75 billion euros ($107.4 billion).

Just as importantly, they also have to try and contain the sense that — like pro-democracy revolutionary feeling in north Africa — underlying problems of solvency for governments that share a currency, but not economic levers, now need to be addressed fundamentally, once and for all.And yes, rows about the design of a permanent rescue fund meant to cover any and all potentially contagious problems emerging in less-disciplined eurozone partners can be expected to return with a vengeance.In a painful but apt irony, talks’ host Hungary, an ex-Communist state brought into the EU during iconic enlargement over the last decade, was among the first countries needing propped up by the International Monetary Fund (IMF) as global recession bit.Significantly, eurozone paymaster Germany said Portugal could only call on a European Financial Stability Facility (EFSF), ruling out country-to-country bridging loans.Under the EFSF, ruthless economic reforms are dictated by the IMF.

These have already triggered violent protests in Athens, Dublin and Lisbon.International credit rating agencies forced the pace over recent days with sharp downgrades.Already Tuesday, Portuguese reports teased readers with news the country’s banks were refusing to cover government debt any more and wanted Lisbon to press Brussels for a 15-billion-euro ‘bridging loan’ as it fights the national equivalent of foreclosure.Portugal had to pay sky-high interest rates Wednesday on its latest bond sale — and it must repay some 4.2 billion euros of debt by April 15 plus another 4.9 billion by June 15.”Bailing out Portugal is utterly pointless,” commented ultra-eurosceptic English lawmaker Nigel Farage. “It only traps them into a system for which they are totally unsuited.”An anti-austerity demonstration called for Budapest Saturday now takes on new significance. – Yahoonews