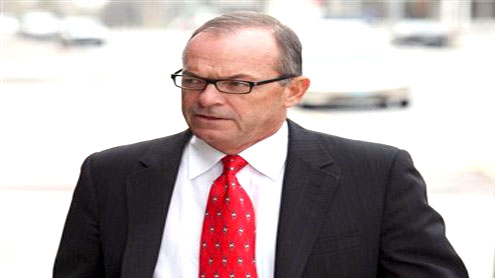 BILLINGS: Authorities from three states are seeking to force former billionaire Tim Blixseth into an involuntary bankruptcy to extract tens of millions of dollars in unpaid taxes he allegedly stashed in Nevada.Blixseth on Wednesday rejected the states’ actions as based largely on “bogus” claims from Montana, where he developed the ultra-exclusive Yellowstone Club.Officials there are seeking almost $57 million from the real estate baron, who now resides in Washington state.Blixseth also owes $1.1 million in Idaho income taxes and almost $1 million in California, according to a petition filed Tuesday in U.S. Bankruptcy Court in Nevada.A court-issued summons gives Blixseth 21 days to respond. He told The Associated Press he will fight the petition and described it as politically motivated.That charge was rejected as “preposterous” by Montana tax department chief Dan Bucks.

“This is an action by our professional staff to make sure the tax debt is collected,” Bucks said. “We learned there was a transfer of personal assets into a Nevada entity and that was endangering our ability to collect the tax debts we believe are due.”The petition lists only $219,258 in Montana taxes, but Bucks said the state intends to use the bankruptcy case to force payment on the entire unpaid amount.Blixseth, 60, built his early fortune in the timber industry, then rose to celebrity-page status with his founding of the Yellowstone Club. The winter playground for the rich in the Madison mountains near Big Sky includes Bill Gates, Dan Quayle and others from the country’s elite among its members.Just before the resort’s 2008 bankruptcy, Blixseth passed control to ex-wife Edra Blixseth as part of their divorce settlement.Within days of giving up the club he started transferring his assets to a Nevada trust, Desert Ranch LLLP. He has said the trust was set up to benefit members of his family.Creditors say he tricked his former spouse into a dubious deal that let him make off with $286 million — money originally billed as a loan to the club.

Forbes once pegged Tim Blixseth’s value at $1.3 billion. Court documents now put the figure at roughly $230 million.On Wednesday, Blixseth acknowledged owing about $1.3 million in income taxes for Idaho and California. He said he intends to pay those debts.But he said Montana’s claim was concocted in a scheme by Democratic Gov. Brian Schweitzer in collusion with Dan Bucks and the current owners of the Yellowstone Club.He described it as a plot to undermine his attempts in federal court to unravel the club’s 2009 sale to Boston-based CrossHarbor Capital Partners for $115 million.”It is bogus. It is fraudulent,” he said of the petition. “Dan Bucks and the state of Montana, Brian Schweitzer — they’re behind this.””Where’s the $219,000 tax bill? Produce the bill sent to me,” he added.Bucks said there had been no communication between his office and Schweitzer about Blixseth’s case and that such communications would violate the department’s rules. CrossHarbor issued a statement saying Tim Blixseth’s tax problems have nothing to do with the firm.

If the petition succeeds, Tim Blixseth would be forced to sell off his assets to pay whatever debts the court determines he owes, said Idaho Deputy Attorney General Brian Nicholas.That’s what happened to Edra Blixseth, who was discharged from personal bankruptcy in February after two years, following the sale of her art, jewelry, homes, vehicles and luxury jet.But if Tim Blixseth wants to pay his taxes before the case reaches that point, “We’d love to take it,” said Nicholas.An attorney for the liquidating trust in the Yellowstone Club’s 2008 bankruptcy said that if the states’ bankruptcy petition succeeds, the trust conceivably could join the petition to seek the $286 million it says Tim Blixseth owes.Trust attorney Charles Hingle said no decision has been made on whether the trust will pursue that option. – Yahoonews

NFC implementation report to be tabled in next session: Senate told