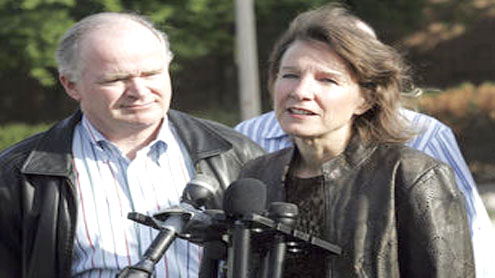 DETROIT: Marie Walsh was in her upscale Southern California home with her youngest daughter when officers arrived and sent her secret past crashing into the present. Not even her husband knew she’d escaped from a Michigan prison three decades earlier, changed her name and was a wanted fugitive.The new life she’d built was uprooted that day in April 2008, when the federal marshals handcuffed her. But it was her three children, she said, who were most lost.”They thought they knew the world and knew their lives, and then all of a sudden their lives kind of exploded,” Marie Walsh told The Associated Press during a phone interview Wednesday from her home in San Diego, where she lives with her husband of more than 20 years.Now, after spending 13 more months in prison and finishing probation, Walsh is finally talking about her past, which she details in her new book, “A Tale of Two Lives.” The book recounts her painful decision to skip her mother’s funeral, lying to the people she loved most and her time in prison.

“It’s about my odyssey through the system from a teenager who got on the wrong path,” Walsh said. “Escaped it for a while and built a life against the odds … and was snatched away from it at age 52.”Walsh was Susan LeFevre when she scaled a 20-foot barbed-wire fence at the Detroit House of Corrections in 1976. She still has a scar on her hand.She was driven away by her grandfather — as a search helicopter hovered nearby — and taken to his home in New Baltimore, Mich. Her mother gave her a few hundred dollars, she said her goodbyes to family members and caught a ride with a friend to the West Coast.”Somewhere between the cornfields of the Midwest and the western Rockies, Susan ceased to exist,” she wrote.She’d served 14 months of a 10-year prison sentence for a heroin deal when she fled. Walsh, who maintains her innocence, said she agreed to plead guilty to a drug charge because she was promised probation. She also feared going through a trial where a drug agent known for helping get convictions would testify.

Once in California, she used her middle name — Marie — and took the last name Day. She worked odd jobs, kept out of trouble and successfully stayed under the radar.Then she fell in love. She decided to divulge her past to the man she planned to marry, but her fiance used the information as leverage when they fought and threatened to turn her in. She broke off the engagement.She eventually met and married Alan Walsh, a financial executive with a trash company, and the couple had three children, now ages 18, 23 and 25. But she chose not to tell any of them about her past — even when her mother died.In the book, Walsh describes going with her husband to her parents’ home in Saginaw, Mich., to say their goodbyes just before her mother died in 2004. But she told him they wouldn’t be going to the funeral.Walsh recalled that he asked her: “What kind of person doesn’t go to her own mother’s funeral?”At the time she thought, “the kind of person who has never told you the secret of her past,” she wrote in the book.

The day she was arrested, a federal marshal called her pretending to be a landscaper and told her he’d accidentally cut a palm frond that fell onto one of her plants. When she went outside, he pulled out a badge and asked if she was Susan LeFevre.”I am Marie Walsh,” Walsh told him, according to her book. Then he showed Walsh her mugshot from the 1970s.Her daughter, who was in the next room getting ready for school, rushed in, saw what was happening and started to cry. Walsh tried to reassure her, called her husband, then was escorted to a car where she was handcuffed.”It was hard on them,” she said of her children, during the interview with the AP. “It was harder than I thought.”As for her husband, Walsh said he wasn’t completely shocked because she had told him she “had a dark past” that involved drugs. He was most bothered by the swirling media attention.”It was unsettling for him. We’re both very private,” Walsh said.

She was returned to prison in Michigan, serving another 13 months, before earning a legal release in May 2009. The previous September, a judge placed her on probation for the escape and separately, the Michigan Parole Board voted to release her from prison on the drug sentence, saying she led a productive and crime-free life in California.Walsh is now promoting her book, which she said she wrote in part to open readers’ eyes to what she said is America’s misguided war on drugs and the harsh treatment that she and her fellow inmates endured. An interview on “The Oprah Winfrey Show” is scheduled to air Thursday.But once that’s done, Walsh said she hopes to slip back into the obscurity that was the hallmark of her existence for 30-plus years in California.”I’m gonna do this for a short time, then I want to be left alone,” she said. – Yahoonews