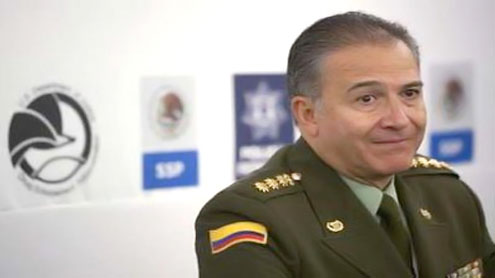 Mexico: Drug cartels are increasingly recruiting common criminals and quickly converting them into killers, the head of Mexico’s federal police said Wednesday.Public Safety Secretary Genaro Garcia Luna said new drug cartel recruits can reach the position of hit man in a month, a process that used to take 15 years.Garcia Luna said his agency has began combatting common crime as it fights drug cartels in response to the changing nature of organized crime in Mexico.”For too long the fight against organized crime has been concentrated on the leadership and now it’s important to fight crime at every stage,” Garcia Luna told representatives from more than 100 countries attending the annual International Conference for Drug Control.The drug cartels are recruiting low-level lawbreakers such as street drug dealers and robbers, a tactic first used by the brutal Zetas drug gang and now being copied by other cartels.

The Zetas, originally ex-soldiers acting as hit men for Mexico’s Gulf drug cartel before breaking off on their own, have no geographic concentration like other cartels and therefore have shown up in disparate parts of the country, authorities said. They operate almost like franchises, sending one member to an area they want to control to recruit local criminals.Officials at the drug control conference say the Zetas have now spread their reign of terror from the border with the United States to the border with Guatemala — and across it.Guatemala Security Vice Minister Mario Castaneda said the Zetas are recruiting former elite Guatemalan soldiers and training them in camps in the Central American country.At least six former “kaibiles” — Guatemalan soldiers trained in counterinsurgency — linked to the Zetas have been arrested in Guatemala, Castaneda said.Mexico first warned in 2005 that the Zetas were recruiting “kaibiles.”Guatemalan authorities are also investigating military personnel for allegedly stealing weapons from the army and selling them to drug traffickers, Castaneda said.

“We have documented at least three robberies” of army weapons, he said.In 2009, Guatemalan police seized 563 grenades and more than 3,800 bullets from the Zetas that investigators said belonged to the army.Since 2008, when the Zetas killed Guatemalan drug boss Juan Jose “Juancho” Leon, the gang began controlling cocaine traffic in the area.Castaneda said Mexico’s powerful Sinaloa drug cartel is also in Guatemala. A U.S. law enforcement official who was not authorized to be quoted by name said that Sinaloa dominates trafficking in Costa Rica, Nicaragua and Panama and that the Gulf cartel also has operations in the first two countries.Both the Zetas and Sinaloa cartels appear to operate in Honduras, and Sinaloa has made some inroads in Guatemala as well, the official said. The Central American countries are “a major route for the cocaine coming up from South America,” the official said.Mexican cartels have been increasing their presence in Central America since 2006, when Mexican President Felipe Calderon launched a crackdown on drug traffickers.Honduran Security Vice Minister Armando Calidonio said several Central American governments are considering the creation of a regional intelligence center to fight organized crime. – Yhoonews