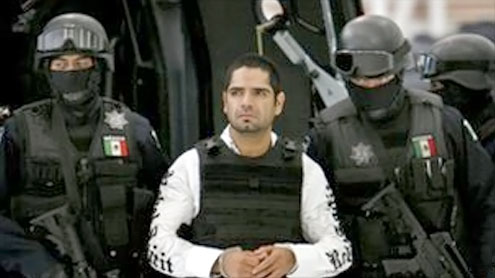 Police in Mexico say a suspected cartel leader they arrested on Friday has confessed to ordering the murder of 1,500 people in northern Chihuahua state.Jose Antonio Acosta Hernandez, 33, is also suspected of masterminding the attack on a US consulate worker and her husband in Ciudad Juarez last year.Officials say Mr Acosta Hernandez is a key figure in the Juarez cartel.Juarez is Mexico’s most violent city, with more than 3,000 murders in 2010.The suspect, who is better known as El Diego, is accused of being the leader of the La Linea gang, whose members work as hired killers for the Juarez cartel.

The cartel controls some of the main drug smuggling routes from Ciudad Juarez into the United States.olice believe El Diego was also behind a car bomb attack which killed four people in the border city, the first such attack in Mexico’s spiralling drug-related violence.Head of Mexico’s federal police anti-drug unit Ramon Pequeno said Mr Acosta Hernandez had also admitted to ordering the killing of 15 people, most of them teenagers, at a party in Ciudad Juarez last year.The Mexican government had offered 15m Mexican pesos ($1,275,000; £778,000) for information leading to his arrest.

US prosecutors said they wanted to try him in the case of the 2010 killing of US consulate employee Lesley Enriquez, her American husband Arthur Redelfs, and the husband of another consular worker, Jorge Alberto Salcedo.They were shot dead in their car after leaving a social event in the city.Ms Enriquez, 35, was four months pregnant when she died. The couple’s seven-month-old daughter survived the attack and was found crying in the back seat.Mr Salcedo was killed in a near-simultaneous drive-by shooting as he drove away from the same event. – BBC