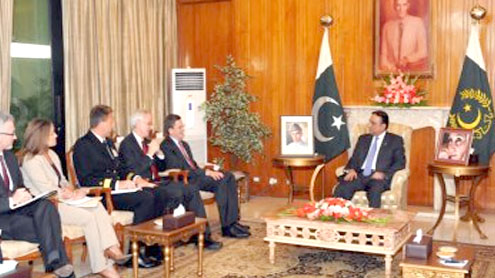 ISLAMABAD: President Asif Ali Zardari has underlined the need for clear terms of engagement that should be agreed upon before hand between Pakistan and the United States in the war against militants so that conflicting positions and unilateral actions did not adversely impact on the bilateral ties between the two countries.

The President said this during his meeting with US Special Representative for Pakistan and Afghanistan, Ambassador Marc Grossman, who called on him here at the Aiwan-e-Sadr on Monday.Ambassador Grossman was accompanied by Ambassador Cameron Munter, Ambassador Ryan C Crocker, Rear Admiral Philip Davidson, and other senior officials.

Minister for Foreign Affairs Ms. Hina Rabbani Khar, Minister for Finance Senator Dr. Abdul Hafeez Shaikh, Minister for Interior Senator Rehman Malik, Secretary General to the President M Salman Faruqui, Senator Syeda Sughra Imam, Foreign Secretary Salman Bashir and Spokesperson to the President Farhatullah Babar also attended the meeting.Briefing the media Spokesperson to the President Farhatullah Babar said that Pak-US bilateral relations, war against militants and regional situation with special reference to Afghanistan was discussed during the meeting.Babar said that discussing the war against militants, President Zardari said that in the absence of well-defined and documented terms of engagements, wrong plugs may be pulled at the wrong times by any side that could undermine the bilateral relations.

The President said that terms of engagement should be clearly defined and specified so that any dispute could be settled amicably through the available institutions.Farhatullah Babar said that the President also emphasized that a long-term, sustainable and multi-dimensional relationship with the United States should be based on mutual interest, trust and mutual respect.

Discussing the war against terror, the President also underlined Pakistan’s resolve to continue its struggle till its logical end saying that it was in our own interest to fight militancy and to rid our land of the extremists and militants.He said that Pakistan has rendered unparalleled sacrifices in this struggle and was determined to continue this fight till its logical conclusion.

The President also reiterated his call to the international community to take effective steps to end all avenues of funding for the militants and their activities.Discussing mutual relationships and the current regional developments, the President underlined the need for mutual trust and to work more closely in finding solutions to the prevailing challenges.Ambassador Grossman thanked the President for the meeting and said that US was open to the suggestion put forth by the President. – APP