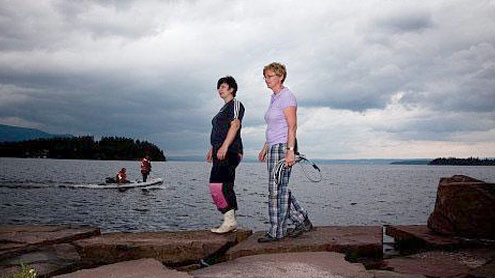 A married lesbian couple saved forty kids the day Anders Behring Breivik killed 76 people in a combined bombing and shooting attack in Norway, reports Finnish newspaper Helsingin Sanomat. Hege Dalen and Toril Hansen were eating lunch on the other side of the shore from the campsite where Breivik attacked. Kids started to run into the water to swim away from the attacker. Once they saw what was happening, they jumped into their boat and collected kids from the water and took them to the opposite shore to safety.

They did four trips into the water and saved forty kids. They noticed bullet holes in the side of their boat in between trips. Talk About Equality, a gay rights blog, wrote about the story wondering why more major news outlets haven’t picked it up, saying, “Several blogs and gay and lesbian publications are now picking up the story, but the heavy hitters who usually kill for hero stories like this, have remained silent.”  – Yahoonews

Debt is a done deal, but peace truce already fades

Timing of US drone strike questioned

Timing of US drone strike questioned