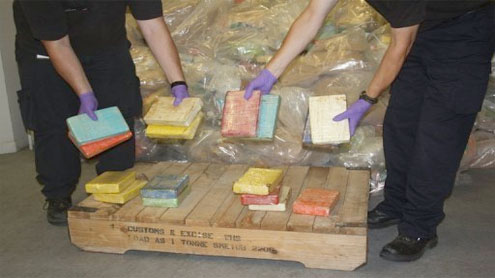 Police have seized Britain’s largest ever cocaine haul, worth up to £300 million, from a luxury yacht which had sailed from the Caribbean, officials said Wednesday.

The 1.2-tonne stash was found hidden under the bathing deck of the pleasure cruiser docked in the port of Southampton in southeast England, Britain’s Serious Organised Crime Agency (SOCA) and UK Border Agency (UKBA) said.Police believe the drugs were loaded onto the boat in Venezuela.In dawn raids Tuesday Dutch police, acting on intelligence from British and French authorities, arrested six men suspected to be involved in an international drugs ring responsible for the shipment.Officials said it was the largest haul of Class A drugs — classified as those most likely to cause harm — ever found in Britain.

Authorities were alerted to suspicions over the yacht, named Louise, while it was in the British Virgin Islands in the Caribbean in May.The boat was then intercepted in Southampton in June on its way to the Netherlands.Dutch police arrested the yacht’s owner, 60, after raiding his home in the town of Meppel, about 140 kilometres northeast of Amsterdam, and raided a yachting business premises in the southern Dutch town of Waalwijk.They also arrested the owner’s three sons, aged 34, 32 and 27 and two other associates, both aged 44, a Dutch prosecutors’ spokesman told AFP.”One is believed to have been the taskmaster behind the drug trafficking,” Wim de Bruin said.Police also searched two businesses in Antwerp, Belgium, where they confiscated computers, a prosecutors’ statement added.

Deputy director for SOCA International David Armond said the find was “hugely significant for Europe”.”This seizure is a great success in the international effort to damage and disrupt the cocaine trade, and is a credit to the many nations and organisations involved,” he said.The drugs, estimated to be worth £50 million wholesale but with a street value of up to £300 million, were found in a specially designed compartment after a six-day search of the 20-metre cruiser.British border officials said the concealment was “a professional job”.”The cocaine took up a space of about four cubic metres and was fitted neatly under the diving platform aft with access from the engine room,” a UKBA spokesman said.

“It required some really good blanking panels to hide them and it was ingenious.”The drug was 90 percent pure compared to the 63 percent average purity of drugs seized at the British border, officials said.In coming from Venezuela, the cocaine followed a well-worn route.Gert Rip, Public Prosecutor for the National Prosecutor’s Office in the Netherlands, said: “About 40 percent of all cocaine brought into Europe is trafficked using smuggling routes from the Caribbean.”Venezuela is often used as a supply line of cocaine for the European market.” – Yahoonews