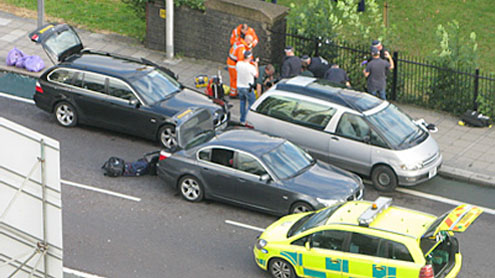 The shooting,which happened at 6.15pm on Thursday in Ferry Lane, Tottenham, also left an officer with gunshot wounds.The incident has been referred to the Independent Police Complaints Commission (IPCC) by the Metropolitan Police.

The watchdog said it understood the dead man had been shot by police and an officer had been wounded.The extent of the policeman’s injuries were not known but he was later discharged from hospital.An IPCC spokesman said: “We do not know the order the shots were fired. We understand the officer was shot first before the male was shot.”A Scotland Yard spokesman said: “At approximately 18.15 on Thursday 4 August there was a shooting incident in Ferry Lane, near Jarrow Road, N17.”

He added: “One male was pronounced dead at the scene and one officer was taken to hospital.”The Directorate of Professional Standards and the IPCC has been informed.”Local resident David Akinsanya, 46, said he arrived at the scene moments after the incident.He was told by a witness that a police officer had shouted to the man to stop “a couple of times”, but the man had not heeded the warning.The witness, who lives next to the spot where it happened, then heard four shots ring out, said Mr Akinsanya.

“There are lots of helicopters and sirens all over the place,” he added.Police have sealed off a large area, leaving people unable to get home.Michalis Chatziantouiou, 24, said he entered a supermarket near Tottenham Hale Tube station at around 6pm.When he left the shop 20 minutes later the whole area was taped off, he said.”We can’t go home – police said they are taping the area off for five hours,” he added. – Skynews