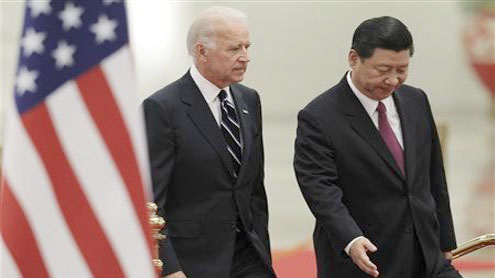 US Vice-President Joe Biden has told his Chinese counterpart Xi Jinping that global economic stability rests on the US and China finding common ground.Speaking on the first day of an official visit to China, Mr Biden said a close relationship with China was of the “utmost importance”.

The trip comes amid mounting tension between the two over America’s debt.Mr Biden’s visit was overshadowed by a brawl at an exhibition basketball game between a US and a Chinese team.Chinese state-run media has been scathing about the recent political showdown in the US over its borrowing ceiling, railing against America’s “addiction to debt”.China is the American government’s biggest foreign creditor – holding $1tn (£608bn) of US debt – and has called on the country to do more to reduce its budget deficit.

Earlier this month, the US suffered a historic credit downgrade by rating agency Standard & Poor’s.It was seen as a major embarrassment for the administration of US President Barack Obama.Analysts say China is also clearly worried about its holding and criticism at home for having so much of the country’s savings in US investments.During round-table talks, Mr Xi – who is widely tipped to be China’s next leader – made clear that economic concerns were for now dominating the relationship between the two nations.”Recently, turmoil in international financial markets has deepened and global economic growth faces severe challenges,” Mr Xi told the US vice-president, according to the Chinese foreign ministry.”As the world’s two biggest economies, China and the United States have a responsibility to strengthen macro-economic policy co-ordination and together boost market confidence.”

Speaking in Beijing’s Great Hall of the People, Mr Biden said: “I am absolutely confident that the economic stability of the world rests in no small part on co-operation between the United States and China.”He said: “It is the key, in my view, to global stability.”The BBC’s Michael Bristow in Beijing says there has been little talk about how China’s own economic problems have left it exposed to changes in the value of the dollar.During the five-day trip, Vice-President Xi is also expected to underline Chinese opposition to plans to sell US fighter jets to Taiwan.The Obama administration is to decide by 1 October whether it will sell F-16 fighter jets to Taiwan.The China Daily newspaper said the potential arms sale was the biggest source of disagreement between the countries.
Wielding metal chairs

On Thursday, a goodwill basketball game ended in a punch-up between the Georgetown University Hoyas, from Washington DC, and the Bayi Rockets.Amateur video of the fight shows Chinese players wielding metal chairs while fans jeer and toss water bottles at the American players.The game at the Beijing Olympic Sports Centre Stadium had to be stopped with just over nine minutes left on the clock and the score tied at 64.The Georgetown University and Bayi Rockets players threw punches and chairs – courtesy SportsGrid.comIt was unclear whether a re-match scheduled between the two teams on Sunday night in Shanghai would still go ahead.Georgetown Hoyas head coach John Thompson III said in a statement emailed to the Associated Press news agency: “Tonight, two great teams played a very competitive game that unfortunately ended after heated exchanges with both teams.

“We sincerely regret that this situation occurred.”Vice-President Biden was not at the game, but on Wednesday he watched the Hoyas beat the Shanxi Zhongyu Brave Dragons 98-81.Mr Biden is visiting China at the invitation of Mr Xi, as the Obama administration seeks to strengthen ties with the next generation of Chinese leaders.Mr Xi is widely expected to take over the chairmanship of the Chinese Communist Party in 2012 and to be formally anointed as president in March 2013.This visit, which was agreed in January, will pave the way for Mr Xi to visit Washington later in the year. – BBC