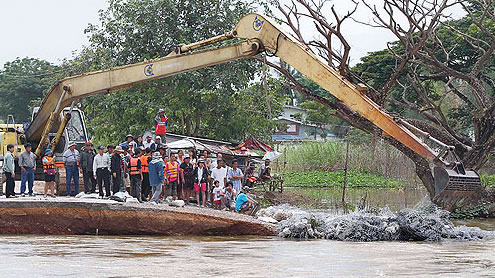 PM inspects damage to destroyed sluice gate, Up to 50,000 residents of In Buri district of Sing Buri may be evacuated if the broken dyke at the Bang Chom Sri water sluice gate cannot be fixed fast enough, Prime Minister Yingluck Shinawatra said yesterday. Ms Yingluck made an aerial inspection of the gate aboard a helicopter and later checked the damage from the ground. She said if the dyke was not repaired fast enough to slow the water now gushing through the breached spots into farmland and residential areas, around 40,000-50,000 residents may have to be evacuated to nearby military barracks. Officials have dumped rocks wrapped in wire meshed nets into the water to plug the dyke, a method recommended by the Royal Irrigation Department. Ms Yingluck said the work could be finished in 15 days if there is no more heavy rain. However, the power of the water current is hampering repairs, despite the fact that the dyke has been broken since Sept 13.

As much as 300 million cubic metres of water flows through the Bang Chom Sri gate each day. The RID chief Chalit Damrongsak said repair work was dangerous due to the currents. Ms Yingluck said the Interior Ministry and the military units have joined hands to dredge deeper into canals and waterways in heavily flooded areas so water can be be drained away more quickly. The prime minister said floodwater could harbour diseases, and it was important to push the water out. The military has deployed flat-bottom boats to move the elderly and sick people out of Chaiyo district of Ang Thong province after the dyke at the Bang Chom Sri gate partially collapsed.

The collapse caused a sudden surge of floodwater in nearby Ang Thong, Lop Buri and Sing Buri provinces. The RID expects floodwater in low-lying areas of Ayutthaya, Saraburi and Lop Buri to peak between today and tomorrow. In some areas, water could rise to four metres deep. Royol Chitradon, director of the Hydro and Agro Informatics Institute, said if heavy rain persists, some areas of greater Bangkok could be inundated. The RID should find measures to push more water into the sea. The weather bureau was keeping a watch on storm activities off the coast of the Philippines and assessing whether they will affect Thailand.

In Nakhon Ratchasima, downtown Muang district and 17 other districts affected by overflows of large water basins have been declared disaster areas. The Moon Basin, the Lam Takong Basin and the Lam Chiang Krai Basin have swelled rapidly after main reservoirs such as the Lam Takong and Lam Phra Ploeng overflowed. In Loei, the influence of tropical depression Nesat triggered heavy rains in the heart of Muang district yesterday. A backhoe tries to plug a broken dyke at the Bang Chom Sri sluice gate. The operation to repair the dyke has been hampered by the power of the current flowing through the gate. – Bangkokpost

Israelis and Palestinians embrace only parts of peace initiative

Israelis and Palestinians embrace only parts of peace initiative