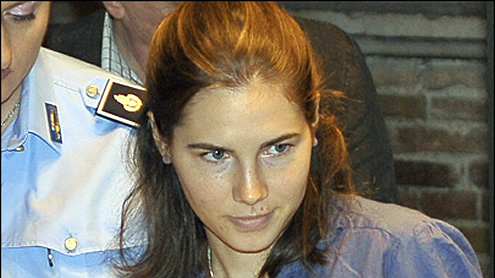 Amanda Knox is preparing to fly back to the United States after being cleared of murdering British student Meredith Kercher and released from prison in Italy. The 24-year old collapsed sobbing in court last night as she was cleared of murdering the British student Meredith Kercher. A jury decided that Knox, who has spent almost four years in jail, was the victim of a miscarriage of justice following a chaotic Italian police investigation.

Her acquittal sparked jubilant scenes among her family in the courtroom in Perugia, who said her “nightmare” was finally over. But the verdict was greeted with anger by crowds in the street who branded her a “murderer” and denounced the decision as an “embarrassment”. It was also a bitter blow to the family of 21-year-old Miss Kercher, who just hours earlier had urged the jury to ignore the “hype” surrounding Knox and uphold her conviction for the 2007 murder. – Telegraph