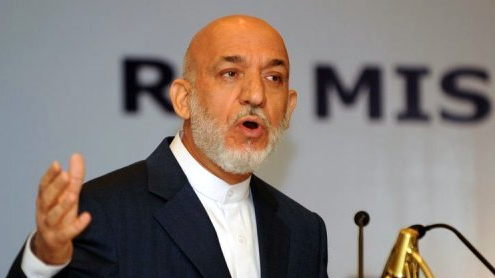 Afghan President Hamid Karzai is trying to reassure Pakistan that a strategic partnership pact signed with India will not affect his country’s relations with Islamabad. Analysts say the deal, which forges stronger security and economic ties between the two countries, could be seen as an aggressive move by India’s longtime rival, Pakistan. A day after sealing a strategic partnership deal with India, Afghan President Hamid Karzai tried to ease any concerns that that the agreement would hurt his country’s ties with Pakistan.

Referring to Pakistan as a twin brother, the Afghan leader said he wants to “emphasize and reemphasize” that the pact is not directed against any country. President Karzai was delivering a speech on the second day of his visit to India. “This is to strengthen Afghanistan, this is to strengthen a brother of Pakistan,” said Karzai. “To train our police for us, to train our army for us, to train thousands of Afghan youth who are right now sitting in India, and if Pakistan and other neighbors of us want to offer the same what we have taken, we would be delighted to take it, so let us be emphatic here, that neither India nor Afghanistan intends this to be beyond the two countries.”

Both the South Asian arch-rivals, India and Pakistan, have been competing for influence in Afghanistan over the last decade. India is one of Kabul’s biggest donors, and so far the assistance has largely focused on the war torn country’s reconstruction. But under the new, wide ranging deal, India will train and equip Afghan security forces.  Observers say this may not go down well with Islamabad, which views Afghanistan as its “backyard”, and which wants to minimize India’s leverage in the country.

The agreement also comes among heightened tensions between Afghanistan and Pakistan.  In recent days, Afghan officials have accused Pakistan of links with militant groups who launch terrorist attacks in Afghanistan. Pakistan has denied the allegations. President Karzai has expressed disappointment that Pakistan has not done more to support stability and peace in Afghanistan. But in New Delhi on Tuesday, the Afghan leader tried to reach out to Islamabad.

“In all sincerity, desirous of results, we will continue to work with our brothers in Pakistan,” he said. “In this relationship, as we began years ago, has unfortunately not given us the result that we wanted.” Afghanistan is seeking to bolster ties with India as it looks ahead to managing its own security after Western troops withdraw by 2014. A series of militant attacks and assassinations in Afghanistan have raised concerns about the future, and the pact signed with India is the first of several being negotiated by Kabul, including one with the United States. – voanews

This author has not added a biography. Meanwhile Top has contributed 3145 posts. Click here to view them.