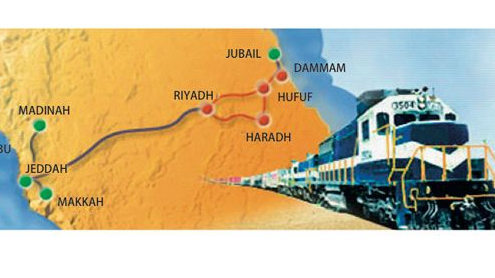 JEDDAH: The Council of Ministers on Monday took a landmark decision to implement a land bridge project that would link the Kingdom’s east with its west with a railway line, bringing about a dramatic change in the region’s transport system.

The project, which will be financed by the state-owned Public Investment Fund, involves the construction of 950 km of a new line between Riyadh and Jeddah and another 115 km track between Dammam and Jubail and expansion of the current Riyadh-Dammam Railway.

“The Cabinet adopted a number of measures regarding the land bridge project as its implementation will be the same as the North-South Railway and the Haramain High-Speed Railway, with the Public Investment Fund financing the project’s infrastructure,” Culture and Information Minister Abdul Aziz Khoja said while explaining the Cabinet decision.The Cabinet meeting, chaired by Custodian of the Two Holy Mosques King Abdullah, also decided that the railway’s operator would be selected after inviting tenders from specialized companies. “The state will remain the owner of the infrastructure of all present and future railway projects,” Khoja said, quoting the Cabinet decision.

Transport Minister Jabara Al-Seraisry thanked King Abdullah for taking the initiative to implement the project, which will be the first rail link between the Red Sea and the Gulf. It will allow freight of cargo imported from East Asian countries via King Abdul Aziz Port in Dammam, and from Europe and North America via Jeddah Islamic Port. This would result in more transit cargo and savings in the regional freight economy.“This is one of the largest infrastructure projects in the region,” Al-Seraisry said without mentioning the project’s cost. According to a previous report, it was to cost more than SR26 billion ($7 billion).

Al-Seraisry said the new railway would boost Saudi exports to foreign markets. “The land bridge along with the North-South Railway and the Haramain Railway will have a big impact on the social and economic development of the country,” he said and thanked the king for his generous support for the railway.In a previous meeting, the Cabinet licensed a joint stock company to establish and operate the land bridge project. “The Council of Ministers decided to license the establishment of Saudi Land Bridge Company as a closed joint stock company,” the Saudi Press Agency reported, adding that the new company would “establish, develop, operate and maintain” the new railway.

The Saudi Land bridge will primarily be a freight/container line interoperable with the North-South railway link. In the initial phase it is expected to transport 700,000 containers.This implies that over 8 million tons of freight cargo would be distributed in Saudi Arabia and the neighboring countries. The train will have the capacity to carry up to 400TEUs. It will also transport millions of passengers every year.With the construction of the Jeddah-Riyadh rail link, the time taken for passenger transport will be six hours instead of the current 10 to 12 hours by bus.