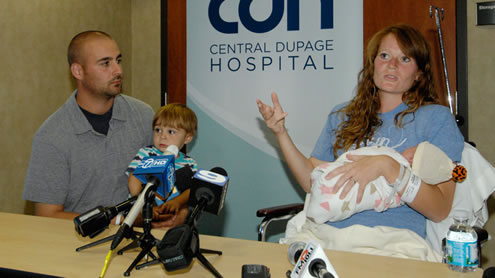 “For me, it wasn’t anything out of the ordinary. I was running up until that point anyway,” Miller told The Associated Press in an interview from the hospital where she was recovering Monday. “I am crazy about running.”
Sunday’s marathon was the eighth for the 27-year-old, who has been running for more than a dozen years. She found out she was pregnant with her second child days after signing up for the Chicago race and decided to play it by ear on whether or not she would run.When the baby hadn’t been born by Sunday, she got clearance from her doctor to run half. She completed it with a with a half-run half-walk approach, drinking lots of fluids and eating a lot along the way. She finished in 6:25:50, much slower than her usual marathon time, but still content.

“Lots of people were cheering me on: ‘Go pregnant lady!'” she said. “I was expecting some negative comments. I don’t remember anything.”It was not Miller’s first marathon while pregnant.In May, the Westchester woman ran the Wisconsin Marathon in 4:23:07 while 17 weeks pregnant with her daughter. In 2009, she ran the Indianapolis Marathon in 4:30:27 while she was 18 weeks pregnant with her son Caleb, who’s 1.Elite runners have trained while pregnant, but doctors say Miller is a rarity. She was 38 weeks and five days pregnant. Full-term is typically defined as 40 weeks.

Marathon world-record holder Paula Radcliffe ran 14 miles a day while pregnant and resumed training weeks after the birth of her first child. She won the New York City Marathon in 2007 just 10 months after delivery. American marathoner Kara Goucher, who gave birth to her son last year, also trained while pregnant, running 80 miles a week at times.”It’s probably the rare woman who is in good enough shape to run a marathon while pregnant. It’s probably the exception more than the rule,” said Dr. Priya Rajan, an assistant professor in obstetrics and gynecology at Northwestern University Feinberg School of Medicine in Chicago.Medical guidelines generally say that if a woman was a runner and healthy before she got pregnant, running during pregnancy is fine. Doctors even recommend exercise for low-risk pregnancies. However, medical experts agree that pregnancy is not the time to begin any exercise endeavors, such as starting marathon training for the first time. For pregnant runners, close monitoring by a doctor is recommended.

Miller who was looking forward to getting rest, said she the only effects she felt from the marathon, which she finished around 3:30 p.m., were blisters on her feet. She was just happy to see her daughter June, who was born at 10:29 p.m. at 7 pounds, 13 ounces with no complications.If she had to do the whole day over?”Definitely again,” she said. “It’ll be a story to remember.” – news.yahoo