by ToP
in Europe, International News
1 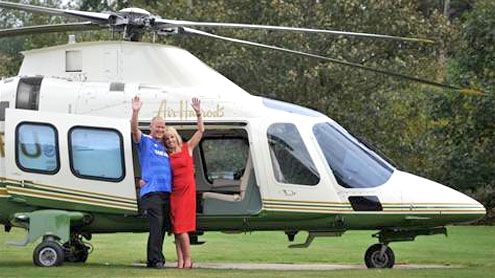 Dave and Angela Dawes, who have won Britain’s third biggest lottery jackpot, have come up with a novel way of avoiding being ostracised from family and friends – they are making them millionaires too.

Dave Dawes, 47, a factory supervisor, and his fiancé Angela, 43, a charity volunteer, were named as the winners of last Friday’s £101m National Lottery jackpot.The couple, who live in a £70-a-week rented one bedroom flat, now plan to go on a spending spree, buying their dream wedding as well as houses in Chelsea, west London, and Portugal.But along with treats for themselves, they have decided to share their luck with up to 20 close friends and family, giving each a million pounds.”It’s an excessive amount of money, but we intend to look after our family and friends and do the best we can,” said Angela, who has a son from a previous marriage.

“We have drawn up a list of 15 to 20 people that we are going to make millionaires,” added Dave who has been married twice before and has two sons.“Any one who has helped us through our life. We intend to make them millionaires, it is not just going to be us.”Before their big giveaway, the win makes the couple from Wisbech, Cambs, a million pounds better off than David Bowie, the 703rd richest person in the country.They move ahead of celebrity couples such as Sharon and Ozzy Osbourne (£95 million), and Gwyneth Paltrow and Chris Martin (£48 million).

Their win is the third biggest-ever EuroMillions prize behind Colin and Chris Weir, from Largs, Scotland, who won £161m earlier this year and an anonymous winner in October 2010 of £113 million.Their winning ticket was only the third they have ever bought and they said that they did not plan on buying anymore, saying it would be “crude” to win again.“I am the kind of person who buys a raffle ticket and throws it away because I never win. Thank god I never threw this ticket away.”The couple said they watched the prize draw live on Friday and could not believe it as all their numbers came up. They said it had still not properly sunk in.

“We were watching TV and the EuroMillions draw show came on so we kept watching, not thinking we would win anything.”We got our tickets out and watched in shock as, one by one, the numbers came up on the line I’d chosen.”We couldn’t believe it! It was too late to call Camelot so I kept the ticket on me all night until the morning but we didn’t sleep a wink.”He said he kept the ticket in his jeans back pocket until he had a chance to get to the Camelot office.”I have never ever won anything in my life. I checked the ticket 50 times during the night. By the time it was drawn the lines were closed so we had to wait until the morning,” said Angela.

The couple, who already share a surname, were planning to get married abroad next year so the windfall means they can now enjoy the wedding of their dreams – and a new engagement ring for Angela.They are planning to buy properties in London and abroad, and are looking forward to a trip to Las Vegas and a skiing holiday in Switzerland in the coming months. But the windfall will also give them a chance to help friends and family close to them.Mr Dawes, who announced his “retirement” at the press conference in Hertfordshire, is an avid Chelsea fan, having been a steward at the club in the past, so a season ticket is also on the shopping list. He is also planning to buy a house nearby the ground.

He said: “I’m not worried about getting a box – I want to stand with the real fans and watch my team play.”I’d also love to live near the ground and have Frank Lampard come over for a cup of tea!”Miss Dawes, who works for the British Heart Foundation, said: “My Mum and Dad live in Portugal so we are going to buy a house over there.”She said that was also where they planned to get married.The winning EuroMillions numbers on Friday 7 were 18, 26, 34, 38, 42 and the Lucky Star numbers were 5 and 8. – The Telegraph