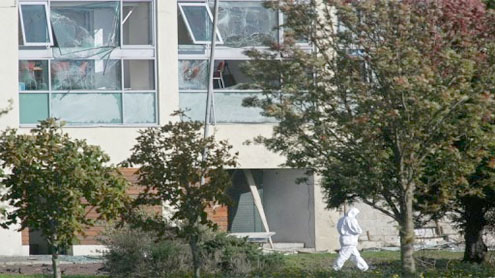 A bomb exploded outside the City of Culture office in the Northern Ireland city of Londonderry, but no people were reported injured, police said.

The explosion occurred at 10:45 pm (2145 GMT) as police evacuated the area after reportedly receiving a telephone warning.The area around Shipquay Street in the city centre remained closed to pedestrians and motorists.Dissident republicans, who oppose British rule in Northern Ireland, claimed responsibility for a pipe bomb which exploded at the same location in January.

“Thankfully no one has been injured but those graces are no thanks to those who are behind this attack,” local lawmaker Mark Durkan told the BBC.”They are out to destroy and they don’t care if they injure or kill when they are at it.”Derry is a city with many challenges and with many difficulties. But the City of Culture is one of the opportunities we have,” he added.

Northern Ireland has been largely peaceful since the 1998 Good Friday agreement paved the way to powersharing, after three decades of bloodshed between pro-British Protestants and nationalist Catholics.But the killings of two British soldiers and a police officer in March last year highlighted the renewed threat posed by dissident paramilitary groups.Londonderry, known as Derry by nationalists, will become the first UK City of Culture in 2013 after it was awarded the title last year. – Yahoonews