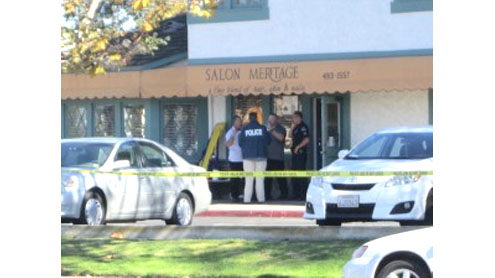 Six people are dead and three in critical condition Wednesday afternoon after a shooting at Salon Meritage in Seal Beach.

Sgt. Steve Bowles of the Seal Beach Police Department said that a 9-1-1 call reported shots fired at 1:21 p.m. Officers responded to the scene — a shopping complex just off Pacific Coast Highway at Fifth Street — and saw a man leaving the area who fit the description of the suspect.That man was arrested without incident. Other officers approached the salon, where one man was found shot outside and eight more victims inside.“Six of the critical victims were deceased,” Bowles said. “Three others were transported to a local hospital (later reported to be Long Beach Medical Center) in critical condition.”

No victim or suspect identity was available as of 4 p.m. Wednesday. Bowles did confirm that the suspect was a white male of undetermined age.Multiple weapons were found in the suspect’s vehicle, and one weapon was recovered inside the salon, Bowles said. The business was busy, and other people inside escaped injury.“From my observations, people were seeking shelter,” Bowles said. “…We are confident that there was a single shooter, and that we have that person in custody.”

Bowles said Seal Beach officers were on scene within a minute of the call, and the arrest was the result of the quick response.“We don’t know the motive of the shooting at this time,” Bowles said. “We are looking at relationships… We are assuming that (a relationship) is involved in the motive but we are continuing the investigation.”Information was sketchy shortly after the shooting, and Bowles declined to say what the gender of those killed or injured were, although he did say that it was a man who was found injured outside.

Seal Beach has a small police force, and several law enforcement agencies responded to the call. Bowles said it will be a multi-jurisdictional investigation, with help from the Orange County Sheriff’s Department, the Long Beach Police Department and officers from the Los Alamitos, Huntington Beach and Cypress police departments.“This is a small city,” Bowles said. “We are concerned now about the family members of the victims. We’d ask that anyone with concerns call the Seal Beach Police Department at 562-799-4100 so we can get them in contact with family support.” –  Gazettes