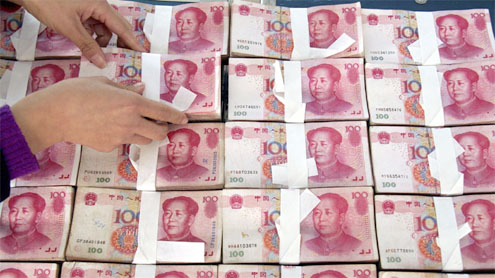 BEIJING: The Chinese in mainland registered a 12-percent  increase in number of millionaires compared with last year, boosted by economic growth and equity market gains, a Capgemini report said Thursday.

The combined wealth of the mainland’s 535,000 high net worth individuals (HNWIs) topped 2.66 trillion U.S. dollars, up 13.2 percent from 2009, according to a joint report issued by Capegemini and Merrill Lynch Global Wealth Management. The number of millionaires on the mainland makes the region the second-largest HNWI market in the Asia-Pacific region and the fourth-largest in the world after the United States, Japan and Germany, according to the report.

China is continuing to see an expansion in its HNWI population and their wealth, fueled by strong macroeconomic growth and market performance, particularly in equities and real estate, said Pauline Ko, market manager for China at Merrill Lynch Global Wealth Management.The mainland’s HNWIs had 42 percent of their investments in equities and 27 percent in real estate last year, the report said.

Wei Zhen, Asia strategist with Merrill Lynch (Asia Pacific) Ltd., said that he expects Chinese millionaires to gradually reduce their wealth allocation in the equity and property markets, as the government will not loosen its grip on the real estate market anytime soon and global equity markets may turn volatile.Wei projected that China’s economy will expand by 9.3 percent this year and nine percent in 2012. – APP