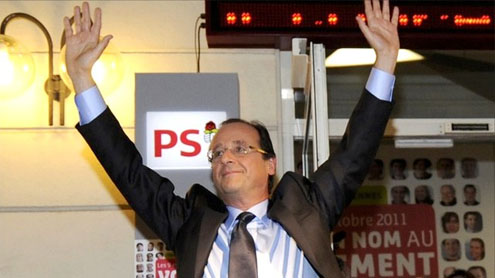 Francois Hollande has been elected the French Socialist Party’s candidate for the 2012 presidential vote when he is expected to challenge Nicolas Sarkozy.

His rival, Martine Aubry, conceded victory in Sunday’s primary run-off before final results were known.In his victory speech, Mr Hollande said he would champion those who could “no longer bear” Mr Sarkozy’s policies.Opinion polls suggest he could beat President Nicolas Sarkozy, who has not formally declared his own bid.Mr Hollande had a lead of 56% to 44% over his rival in the count.

It is the first time voters have taken part in a US-style primary race, and some 2.7 million voters took part in the run-off.One of Mr Sarkozy’s top allies dismissed Mr Hollande’s election result as weak.Speaking at Socialist headquarters in Paris, Mr Hollande said: “I have heard the anger and concerns of a great number of people, unemployment, job insecurity, high rents, healthcare which is becoming more and more inaccessible.”I have noticed the concerns about our common future, the failures of globalisation, the failings of Europe, the environment.”

“France must find a plan again which will give it back all of its meaning,” Mr Hollande said, adding that he would “show a different vision of the presidency”.He would, he said, be “the candidate of respect and dialogue”.”I want to offer France’s youth a better life than ours: I want to put the magic back in the French dream,” he said.In her concession speech, Ms Aubry, who leads the Socialist Party, said she welcomed Mr Hollande’s victory and would invest all her “strength and energy to ensure that he is the president of France seven months from now”.

Mr Hollande became the party favourite after the withdrawal of previous Socialist front-runner Dominique Strauss-Kahn, a former head of the International Monetary Fund who was arrested in New York earlier this year on suspicion of attempted rape, a charge later dropped.Francois Hollande, who led the party for more than a decade before Ms Aubry, is seen as a genial, consensus politician but critics point to his lack of experience in government, says the BBC’s Hugh Schofield in Paris.Mr Sarkozy, who won power in 2007 after 12 years of fellow conservative Jacques Chirac, has yet to declare a re-election bid but is widely expected to do so. Opinion polls suggest he would trail Mr Hollande in the election, which takes place in two rounds on 22 April and 6 May.

Jean-Francois Cope, who leads Mr Sarkozy’s UMP party, sought to play down Mr Hollande’s victory.Speaking on France 2 TV, he said the Socialist candidate should have taken “65% or 70%” after all the endorsements he had received from his rivals in the first round.Dismissing Mr Hollande and Ms Aubry as “two sides of the same coin”, he said the leaders of the right and centre-right would now seek to “re-balance the debate”, and the Socialists would have “a lot of questions” to answer. – BBC