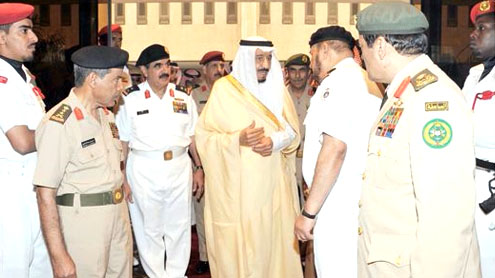 RIYADH: Defense Minister Prince Salman visited the command of Naval Forces here on Sunday and said the vital force holds a leading position in the region.

“I am happy to visit the command of naval forces, which have achieved remarkable progress in terms of training and armament,” the minister wrote in the command’s visitors’ register. “Our naval forces now hold a prominent position among the region’s forces.”He emphasized the navy’s role in defending the Kingdom’s coastal areas and resources. He described the naval forces as the third pillar of the country’s armed forces.Prince Salman expressed his confidence in the force in defending the country and its people. He also disclosed plans to develop the navy and other sectors of the armed forces.

“Our government always works for development in all areas as per the directives of Custodian of the Two Holy Mosques King Abdullah, the commander of the armed forces,” the minister told the officers.Earlier on arrival at the command, Prince Salman was received by Deputy Defense Minister Prince Khaled bin Sultan, Chief of Staff Gen. Hussein Al-Qubail, and Naval Force Commander Gen. Dakhilallah Al-Waqdani.

“The navy plays an important role in defending the Kingdom’s coastal areas, which are replete with natural resources and host major industrial and economic installations,” the general said.King Abdullah Economic City in Rabigh and Jazan Economic City are located on the Kingdom’s west coast. Gen. Al-Waqdani urged Saudi authorities to take steps to further strengthen the Kingdom’s naval forces to enhance their combat preparedness.Prince Salman, who was appointed defense minister recently, visited the Royal Air Force on Saturday and commended the remarkable progress achieved by the force and its combat readiness. – Arabnews

13 eunuchs killed in fire in India