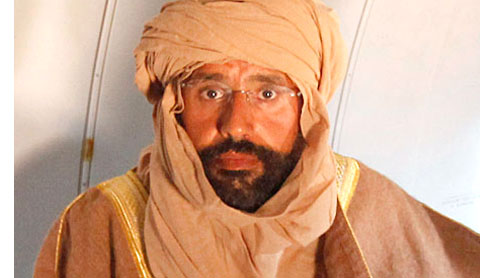 Libya: Seif Al-Islam Qaddafi was betrayed to his captors by a Libyan nomad who says he was hired to help Muammar Qaddafi’s son escape to neighboring Niger on the promise that he would be paid one million euros.

Seif Al-Islam, wanted for prosecution by the International Criminal Court, was captured at the weekend in what one official in the country’s new government said was “the final chapter in Libya’s drama.”With a black scarf wrapped around his head, Yussef Saleh Al-Hotmani said that he contacted revolutionary fighters in Libya’s south to inform them when Seif’s two-car convoy would be passing through the area on the night of Nov. 18.“I made Seif believe that I trusted him,” he said on Tuesday in Zintan, where Seif Al-Islam is being held at a secret location before the details of his prosecution are finalized.

On the night of Seif Al-Islam’s capture, Hotmani said he was traveling with the younger Qaddafi’s personal guard in the first car of their convoy.“I had agreed with the fighters (who captured Seif Al-Islam) that the best place for the ambush would be in a part of desert that was surrounded by high ground,” he said.Ten fighters from Zintan, in the Western mountains, and five from Hotmani’s own tribe, Al-Hotman, were waiting.“When we arrived at the dark, deep hollow the gunfire was very precise, it only took about half a minute to capture the first car,” he said, adding that he had intentionally told Seif Al-Islam’s convoy to have the vehicles spaced 3 km (2 miles) apart to give the fighters time to regroup and for Hotmani to join them.

“When the second car arrived, we started to shoot very precisely, to damage the vehicle so he could not escape.”Seif Al-Islam, dressed in a long robe and a brown head scarf wrapped around his face, jumped out of the car, tried to run, but was captured, says Hotmani. “We treated him as a prisoner of war.”Mutiny or conspiracy?It is unclear if Hotmani had planned to ensnare Seif Al-Islam from the moment he linked up with the fugitive’s group in the Sahara desert, or if he defected when he had doubts about his payment and feared that he might be killed.The Saharan nomad, who calls himself the “son of the desert,” refused to give details on when or how he contacted the 15 fighters of the interim government who caught Seif Al-Islam.

“I’m sure (Seif Al-Islam and his guards) were planning to execute me when we reached the border. They had two handguns, two grenades, a knife and handcuffs. They were ready to execute me if they had any doubt,” said Hotmani. He spoke with the new Libyan flag draped over his shoulder as a show of solidarity with the country’s new rulers.The fighters allied to the National Transitional Council (NTC) who caught Seif Al-Islam refer to Hotmani as a “hero.”There was less than five thousand dollars found in the two-car convoy and Hotmani said he was not paid a penny of the one million euros promised to him.“I didn’t ask for an advance payment or anything,” he said. “There was no money in the car. This proves that he wanted to execute me at the border.”

Seif Al-Islam was ‘in denial’Proclaiming to know several languages and having run a small tourism agency, Hotmani said he was hired as a desert guide for the group that included Seif Al-Islam.“Seif didn’t think I knew it was him. Nobody told me it was him,” said Hotmani.Why Seif Al-Islam trusted the man who would eventually betray him is not clear but Hotmani said the younger Qaddafi, who had lost his father and three brothers in a revolutionary war that ended his family’s rule, was in denial.

“Seif was dreaming of leaving Libya and then to eventually return,” said Hotmani.Those who were with Seif Al-Islam in the hours after he was captured paint a picture of a solitary man, calm and controlled.The commander of the fighters that conducted the ambush, Al-Ajami Ali Al-Ateri, said that on the plane which transferred their prisoner to Zintan where he is being held, Seif Al-Islam had asked if it had been the Hotmani that had tipped them off. – Arabnews

The upswing in Indo-Pak ties