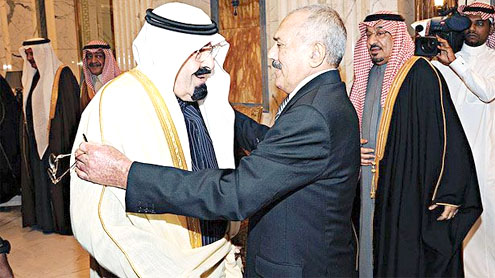 JEDDAH: Yemeni President Ali Abdullah Saleh signed a landmark agreement in Riyadh on Wednesday to hand over power after 33 years in office, with Custodian of the Two Holy Mosques King Abdullah saying it would open a new era of peace in the Arab country.

“Today a new page opens in your history,” King Abdullah, who witnessed Saleh’s signing of the historic Gulf initiative along with GCC foreign ministers, told the Yemeni parties. The king also urged them to honor the deal by implementing its terms and conditions.“Fulfill your pledge,” the king told the signatories of the agreement. “It demands vigilance from all of you to protect your interests and objectives,” the king added in a brief speech during the signing ceremony. He stressed that freedom with all its forms cannot be achieved without responsibility.

Under the agreement, which Saleh had stalled for months in defiance of intense domestic and international pressure, the veteran leader will hand power to Vice President Abdrabu Mansur Hadi in return for immunity from prosecution for him and his family.Hadi would form a new government with the opposition and call for an early presidential election within three months. Saleh will remain honorary president for 90 days.The Saudi leader advised his Yemeni neighbors to stand united as conflicts would set off chaos and confusion, leading to more bloodshed in the country. He also asked the Yemeni opposition to forget about the past to bring stability to the country.

In his speech King Abdullah quoted a number of verses from the Holy Qur’an emphasizing the importance of peace and reminding Yemenis that conflicts would destroy them and their country. He also pledged Saudi Arabia’s continuous support to Yemen, and urged Yemenis to work hard with patience to achieve their hopes and aspirations.Live footage of the ceremony aired by Saudi Television showed Saleh signing the agreement at the king’s palace in Riyadh. Representatives of Yemen’s ruling party and the opposition also signed the deal, which is intended to end 10 months of deadly violence in the country.

“We welcome partnership with the opposition to manage the country’s affairs and rebuild what the crisis has destroyed,” Saleh said, stressing that it should be a “real partnership.” He thanked King Abdullah for playing host to the peace deal as well as all those who have contributed to the agreement.He sought the assistance of King Abdullah, other GCC leaders and the UN Security Council to implement the agreement and pledged his full cooperation with the new government.

After Saleh’s speech, King Abdullah said: “Thank you, honorable president. We also thank God Almighty. Tonight is a pleasant one as all these great people have assembled here in the service of Yemen, which is one of the ancient countries. I wish every one of them success in removing hatred. I am sure that there will not be any hatred amongst you as it creates enmity. I hope all of you would work for the betterment of Yemen and its people.”

The ceremony was attended by Crown Prince Naif, deputy premier and minister of interior, Defense Minister Prince Salman, Foreign Minister Prince Saud Al-Faisal, intelligence chief Prince Muqrin and other senior princes, ministers and top officials.It was the fourth attempt to wrap up a power transfer accord that Saleh backed out of on three previous occasions at the last minute.GCC Secretary-General Abdullatif Al-Zayani, who had worked hard for the deal during the past months, described the accord as “a historic and decisive moment.” He commended King Abdullah for his endeavors to reach an agreement between the Yemeni ruling and opposition parties.

“We are thankful to God for helping the GCC achieve this great result as a result of its strenuous efforts to establish peace and stability in Yemen,” the GCC chief said and congratulated all GCC leaders for the big achievement. He also thanked President Saleh and members of the Yemeni ruling party for their cooperation.Al-Zayani also noted the roles played by the United States, the European Union, Russia and the United Nations for their support to make the GCC initiative a success.

UN envoy Jamal Benomar, who was present in the signing ceremony, said: “This is a historic day. The time has come to work for building Yemen. Let’s hold our hands together for national reconciliation and establish peace and stability,” he told the Yemenis.Benomar said the United Nations would work together with the GCC to protect the interests of Yemen.

Meanwhile, Saleh told UN chief Ban Ki-moon he would come to New York for medical treatment immediately after signing the power transfer deal. Ban said Saleh had asked him that the United Nations should provide “necessary support” after the signing of the deal.“I told him that the United Nations will spare no efforts and … I will do my best to mobilize the necessary resources and support so that peace and stability and democratic order will be restored in Yemen,” the UN chief said. “He told me clearly that he will hand over all powers,” Ban added. Ban said he hoped the United Nations would be able to “be present and continue to monitor and help the full implementation of this agreement.” – Arabnews

Drake “takes care” of No. 1 on album chart