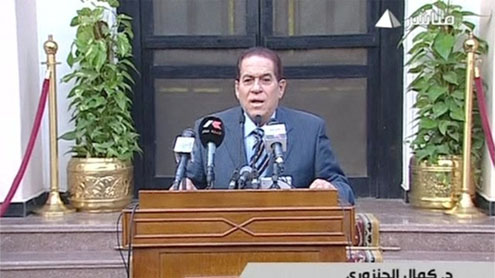 Prime Minister-designate Kamal Ganzouri has asked Egyptians to “give me a chance” as tens of thousands rally in Cairo against the military rulers.

In his first public comments since being named, he said he would not name a new government before Monday’s polls.The protesters in central Cairo’s Tahrir Square want the parliamentary elections postponed.Not far away, a smaller counter-demonstration was held in support of the military and the elections.More than 40 people were killed earlier this week as the security forces tried to break up the massive protests, leading to the worst violence since the fall of President Hosni Mubarak in February.

But the BBC’s Lyse Doucet in Tahrir Square says a truce seems to have ended the clashes and a carnival atmosphere returned to the demonstrations on Friday.People were letting off fireworks and shouting “Down with the military regime,” she says.The Supreme Council of the Armed Forces (Scaf) is overseeing a transition to civilian rule.Despite promises by the council to speed up the process, some protesters fear it intends to cling to power. They want military rule to end before parliamentary elections are held.

Yet many Egyptians want the polls to go ahead as planned. One influential group, the Muslim Brotherhood – which is expected to do well in the vote – is not supporting the Tahrir Square protests.At least 10,000 people staged a rival rally on Friday in Abbasiya Square – near the defence ministry, north of Tahrir Square – to show support for the military’s electoral timetable.They chanted “Down with Tahrir” and “Yes to the military council”.Washington has said power in Egypt should be transferred to civilians “as soon as possible”.

“The United States strongly believes that the new Egyptian government must be empowered with real authority immediately,” a White House statement said.Sunni Islam’s highest authority, the grand imam of Cairo’s al-Azhar mosque, sent the Tahrir Square protesters a rare message of support. An aide, Hassan Shafie, was shown on local TV telling the crowd on Tahrir Square: “The grand imam backs you and is praying for your victory.”There have also been anti-military protests in Alexandria and the southern towns of Luxor and Assiut, according to the AP news agency.

In Cairo, hundreds of protesters camped outside the cabinet office, saying they would prevent Mr Ganzouri’s team from entering.The prime minister-designate said he was sure that Scaf leader Field Marshal Mohamed Hussein Tantawi had no desire to stay in power, saying that otherwise, he would not have agreed to lead the new government.”Please give me a chance so that I can think and I can see who shall remain and who should go and table my proposal to the military council, Field Marshal Tantawi,” he said in comments broadcast on state TV.

Mr Ganzouri, who headed Egypt’s government from 1996 to 1999 under Mr Mubarak, said he had been granted greater powers than his predecessors but had not yet begun assembling his ministerial team, although it would be formed within the coming days.Until then, he said former Prime Minister Essam Sharaf, who resigned following the violence earlier this week, would remain in office.The Tahrir Square protests, which were backed by some trade unions, had been called a “last chance Friday” rally to demand an immediate transfer of power by the military.Many demonstrators have rejected Mr Ganzouri’s appointment.

“For the second time, we are going to depend upon the old guard of Mubarak’s regime. Why do we not give chance for the young, instead of those people who are 80 years old?” one man in Cairo’s Tahrir Square, Suhir Nadim, told Reuters news agency. On Tuesday, Field Marshal Tantawi accepted the resignation of the previous military-backed civilian cabinet and announced that presidential elections would be held by June 2012 – six months earlier than planned.The military council has apologised for the deaths of protesters, but insisted that parliamentary polls would start on Monday as scheduled.

Much of the recent violence has taken place in Mohammed Mahmoud street, which leads from Tahrir Square to the interior ministry. Soldiers have now set up barricades of cement, metal bars and barbed wire to separate protesters and security forces.Mr Ganzouri, who distanced himself from Mr Mubarak’s regime, has been suggested as a possible presidential candidate.During his term as prime minister he was known as the “minister of the poor” because he was seen as representing the less well-off, and he remains popular with many Egyptians, says the BBC’s Yolande Knell, in Cairo.Monday marks mark the first step of an election timetable which lasts until March 2012 and covers two houses of parliament.The elections will take place in stages around the country – each stage has reportedly been extended to two days. – BBC