Public sector strike set to be largest for a generation 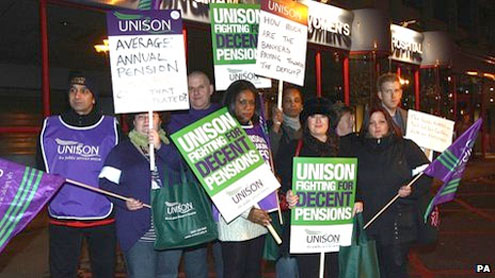 Up to two million public sector workers are staging a strike over pensions in what is set to be the biggest walkout for a generation.

Schools, hospitals, airports, ports and government offices will be among sites disrupted, as more than 1,000 demonstrations are due across the UK.It would “achieve nothing”, Downing Street said, calling for more talks.Unions object to government plans to make their members pay more and work longer to earn their pensions.Cabinet Office Minister Francis Maude branded the action “indefensible and wrong”.”While discussions are continuing, I would urge public sector workers to look at the offer for themselves rather than listening to the rhetoric of their union leaders,” he said.

“These are the sort of pensions that few in the private sector can enjoy.”Shadow chief secretary of the treasury, Rachel Reeves, told BBC’s Newsnight on Tuesday that Labour did not support the industrial action.”We do not support the strike because a strike is a sign of failure,” she said.”But we think the government needs to give something more to low-paid public sector workers. They’ve just seen their pay is going to be frozen effectively for another two years.”We understand why they are striking, because [there is] effectively a tax increase on public sector workers.”

Earlier on Tuesday, union leaders reacted angrily to Chancellor George Osborne’s Autumn Statement announcements of a public sector pay cap of 1% for two years, as well as bringing forward to 2026 the rise in the state pension age to 67.GMB union leader Paul Kenny said: “As well as the shameful unfairness of further pay restraint on already hard-pressed public sector workers, the chancellor’s announcements will push the possibility of a pensions deal further away.

“The [pension] contribution rises government want are plainly unjustified and unaffordable, while moving the goalposts on retirement age mid-negotiation smacks of deliberate deception. No doubt this will boost the strike turnout tomorrow.”Paul Noon, leader of civil service union Prospect, said members felt the chancellor was “aiming yet another punch at them”.The 24-hour strike is expected to disrupt courts, job centres, driving tests and council services, such as libraries, community centres and refuse collections. Highways Agency staff will be on strike, as will many Police Community Support Officers (PCSOs).

Three out of four of schools in England have been affected by striking teachers, early government figures have suggested.The Department for Education said it believed that more than half of England’s 21,700 state schools (58%) are closed, with a further 13% partially open. About 13% are operating as normal, while the rest (16%) are unknown.Education Secretary Michael Gove has said it is “unfair and unrealistic” to expect taxpayers to foot the growing public sector pensions bill.General secretary of the National Association of Head Teachers Russell Hobby responded that “blame for any rise in union militancy – particularly among moderate unions – belongs fairly and squarely at the government’s door: A failure to negotiate in any meaningful sense until the last minute”.
Contingency plans

The UK Border Agency is set to be hit by the walkout of Public and Commercial Services (PCS) union members, and the agency has warned that “people travelling into the UK may experience delays at border control”.Heathrow operator BAA has said that, with contingency plans in place, it hopes that delays at immigration “could be contained to within two to three hours”.The government has said no border controls will be relaxed to ease queues.Hospital managers are planning to postpone thousands of non-emergency operations because of the strike.

Patients needing urgent treatment such as chemotherapy and kidney dialysis will still be able to get it, and maternity units will remain open.Calls to 999 will still be answered, but patients are being urged to think carefully and call only if it is a genuine emergency.The strike was “irresponsible and reckless”, said John Longworth, the director general of the British Chambers of Commerce.He added: “Trade unions are living in a bubble and ignoring the fact that Britain has to make its way in a competitive world.”Weather forecasting staff at the Met Office, catering staff in the House of Commons and museum curators are also among those due to walk out on Wednesday. – BBC