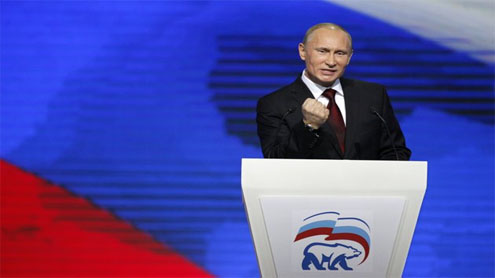 MOSCOW (AP) — Prime Minister Vladimir Putin’s party saw its majority in Russia’s parliament weaken sharply, according to preliminary results released Monday, a humiliating setback for the man who has steadily tightened his grip on the nation for nearly 12 years.

Some opposition politicians and election monitors said even a result of around 50 percent for Putin’s United Russia party was inflated, alleging ballot-stuffing and other significant violations at the polls.The party is still expected to retain its majority in the lower house and Putin is all but certain to win next March’s presidential election, but Sunday’s vote badly dented his carefully groomed image. It reflected a strong public frustration with the lack of political competition, ubiquitous official corruption and the gap between rich and poor, which will pose a growing challenge to Putin’s power.With about 96 percent of precincts counted, United Russia was leading with 49.5 percent of the vote, Central Election Commission chief Vladimir Churov said. He predicted that it will get 238 of the Duma’s 450 seats, a sharp drop compared to the previous vote that landed the party a two-thirds majority in the State Duma, allowing it to change the constitution.

Critics said that even that United Russia performance is strongly inflated, pointing at numerous reports of ballot-stuffing and other violations. The nation’s only independent election watchdog has been subjected to a massive official intimidation campaign in the week before the vote and saw its website blocked by what it described as a massive cyber attack it blamed on authorities.United Russia has been seen increasingly as the party of corrupt officials, and its description as a “party of crooks and thieves” has stuck, flashing up as the first suggestion on Russia’s top web search engine.Putin sought to stem a quick decline in United Russia’s popularity by trying to expand its support base with a so-called Popular Front, an umbrella group for unions, professional associations, veteran groups and others. But the effort has brought no visible result, and Putin last month received a stinging blow to his own ego when he was met with catcalls after a mixed martial arts fight at a Moscow arena.

Opposition leader Boris Nemtsov said after the vote that Putin’s “honeymoon” with the nation was over.”He needs to hold an honest presidential election and allow opposition candidates to register for the race, if he doesn’t want to be booed from Kamchatka to Kaliningrad,” Nemtsov said on Ekho Moskvy radio.Seeing the declining fortunes of his party, Putin named his handpicked successor as president, Dmitry Medvedev, to lead United Russia’s list. The vote will further weaken positions of Medvedev, whom Putin promised to name prime minister after the presidential vote, a move that has fueled public irritation.

Putting a positive spin on the disappointing returns, Putin said late Sunday that “we can ensure the stable development of the country with this result.” But he appeared glum when speaking to supporters at United Russia headquarters and limited his remarks to a terse statement.The Communist Party appeared to benefit most from the protest vote, with exit polls and the early returns predicting it would get nearly 20 percent, up from less than 12 percent four years ago. The socialist Just Russia and the Liberal Democratic Party led by mercurial nationalist Vladimir Zhirinovsky are also expected to increase their representation in the Duma.

Despite that, Putin should still have no problem getting his laws rubber-stamped. Even the Communists have posed only token opposition in the outgoing Duma, and the two other parties have consistently voted with United Russia.About 60 percent of Russia’s 110 million registered voters cast ballots, down from 64 percent four years ago.Only seven parties were allowed to field candidates for parliament this year, while the most vocal opposition groups were barred.Several parties complained Sunday of extensive election violations aimed at boosting United Russia’s results. Communist leader Gennady Zyuganov said his party monitors thwarted an attempt to stuff a ballot box at a Moscow polling station where they found 300 ballots already in the box before the start of the vote and pointed at numerous other incidents of ballot-stuffing.

Russia’s only independent election monitoring group, Golos, which is funded by U.S. and European grants, has come under heavy official pressure in the past week after Putin accused Western governments of trying to influence the election and likened recipients of Western aid to Judas. Golos website was incapacitated by hackers on Sunday, but it was still able to field more than 2,000 observers, and they reported numerous violations, director Liliya Shibanova said.She said many of the violations involved absentee ballots, including so-called “cruise” or “carousel” voting where people with the ballots are bused to multiple polling stations. Many people complained that they were forced to get absentee ballots and hand them over to their bosses.Social media were flooded with messages reporting violations. Many people reported seeing buses deliver groups of people to polling stations, with some of the buses carrying young men who looked like football fans. – News.Yahoo