Attack on Iran will have ‘calamitous’ consequences, says Prince Turki 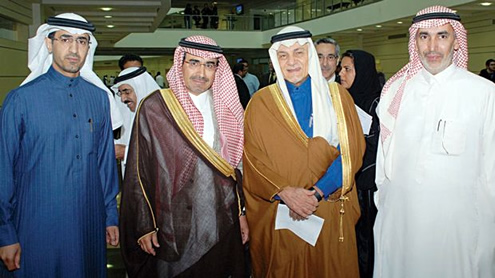 RIYADH: Prince Turki Al-Faisal, the chairman of the King Faisal Center for Research and Islamic Studies, on Monday called for the creation of a nuclear-free Middle East while supporting a system based on rewards and sanctions to deter nations in the region with nuclear ambitions.

Prince Turki, who is extensively engaged in public diplomacy by touring and lecturing across the world, also said that any attack on Iran will have huge consequences for the region and its adverse implications will be felt worldwide. Prince Turki, speaking to an elite group of academics and faculty members at the prestigious Alfaisal University in Riyadh, said a zone free of weapons of mass destruction (WMDs) was the best way to get Iran and Israel on board and to force them to abandon nuclear programs.

“Such a zone must be accompanied by a rewards regime for those countries in the region that join the zone,” said the prince, while stressing and calling for “a nuclear security umbrella guaranteed by all the permanent members of the UN Security Council for the region.” On arrival at Alfaisal University, Prince Turki, who is also a member of the university’s board of trustees, was received by a group of faculty members and students led by university Provost Faisal Al-Mubarak and Norman K. Swazo, acting dean of the College of Science and General Studies. Some senior faculty members and reporter also asked questions during an interactive session in which Prince Turki spoke at length about the university’s programs, research and regional political issues.

Alfaisal University, according to Al-Mubarak, has emerged as a quality institution in a short span of time. Sophia Ikram, the university spokeswoman, conducted a presentation focusing on the growth of the university, whose construction will be completed by mid-2012. Addressing faculty members, Prince Turki welcomed the contributions from non-Saudi faculty members who are intensively engaged in the transfer of knowledge and skills to Saudi society. He, however, called on government agencies and private sector organizations to exert more efforts to absorb unemployed Saudi youths. Prince Turki also noted that he had seen foreigners working in several other countries making very useful contributions to their economies.

The reliance on foreign workers and their expertise in Saudi Arabia is no exception, said the prince when asked about his future perceptions about the education system in the Kingdom and the skills to be acquired by locals to cut dependence on expatriates. Replying to a question about the possibility of an attack on Iran to force it to roll back its nuclear program and the impact of such an action, Prince Turki reiterated that the impact will be “calamitous … cataclysmic, not just catastrophic.” He said that Iranian actions have provoked worldwide opposition but at the same time suggests that Iran’s nuclear program is being singled out, while Israel is being given a clean chit. Any unilateral decision to launch a military attack aimed at halting the nuclear program of Iran could have huge consequences, he warned.

He, however, expressed his grave concerns that if Israel and Iran acquire a range of nuclear weapons, they would unleash a cascade of nuclear proliferation that would significantly destabilize the region and possibly destroy efforts to establish a nuclear weapons free zone in this part of the world. To this end, he also noted that the last year’s nuclear Non-Proliferation Treaty (NPT) review conference included in its final document a call for the establishment of a Middle East zone free of all weapons of mass destruction. Prince Turki, who also shook hands and stood with students for photo sessions, pointed out that an intergovernmental conference to discuss such a zone was scheduled for 2012. Most of the countries in the region except Israel and Iran are pursuing nuclear programs for peaceful purposes. The Kingdom has also announced it will build 16 reactors for nuclear power plants that should start active operations within the next 20 years. – Arabnews