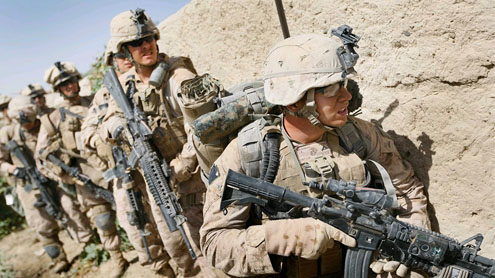 The US military has said it is investigating a video that appears to show a group of Marines urinating on dead Taliban fighters.

The Marine Corps said the actions portrayed in the clip, which was posted online but has not yet been verified, were not consistent with its values.The footage shows four men in military fatigues appearing to urinate on three apparently lifeless men.A man’s voice is heard saying: “Have a great day, buddy.

“The men lying on the ground have brown skin, bare feet and are dressed in loose-fitting outfits. One appears to be covered in blood. The origin of the video is not known, nor is it clear who posted it online.The men in military fatigues seem aware that they are being filmed.

Pentagon spokesman Capt John Kirby said in a statement: “We are deeply troubled by the video.”Whoever it is, and whatever the circumstances – which we know is under investigation – it is egregious behaviour and unacceptable for a member of the military.”Marine Corps headquarters at the Pentagon said in a statement: “The actions portrayed are not consistent with our core values and are not indicative of the character of the Marines in our Corps. This matter will be fully investigated.”A spokesman for the Taliban in Afghanistan told the BBC his group “strongly condemns this action and it is not a human action. It’s a wild action that is too shameful for us to talk about”.

Afghan Member of Parliament Fawzia Kofi said ordinary Afghans, no matter how they felt about the Taliban, would be upset by the video.”It’s a matter of a human being, respect to a human being,” she told the BBC.”I believe that the brutal acts that the Taliban did here during their government and even now is condemned by Afghans. So is watching a brutal act by international forces. We condemn that as well,” she added.

The Council on American-Islamic Relations (Cair) said the video, if verified, showed behaviour that was totally unbecoming of US military personnel.”It’s a disgusting, immoral video. Something that no military would be proud of and I think the least of which would be the American military,” the council’s spokesman Ibrahim Hooper told the BBC.

“It’s unbecoming for any military personnel anywhere in the world, and in fact could be in violation of international laws of war, besides being in violation of the American uniform code of military justice.”The spokesman added that the Cair had written a letter to US Defence Secretary Leon Panetta calling for a “prompt and transparent” investigation.In a separate case, the US military has been prosecuting five soldiers from the army’s 5th Stryker Brigade who are accused of killing Afghan civilians during their deployment in Kandahar province in 2010.

The US has about 20,000 Marines deployed in Afghanistan, based mostly in Kandahar and Helmand provinces. In total, about 90,000 US troops are on the ground in Afghanistan.The US and its partners in Afghanistan have said they plan to hand over security of the country and withdraw combat troops by the end of 2014. – BBC