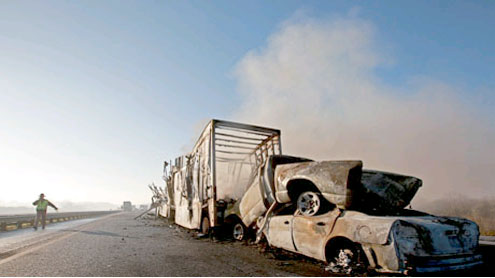 Florida: Ten people died and at least 18 were injured in a series of accidents before dawn Sunday near Gainesville after smoke and fog reduced visibility on the main interstate highway, police said.

The Florida Highway Patrol said the smashes involving 12 cars and six or seven trucks occurred shortly before 4 a.m. on Interstate 75 after smoke from a marsh fire combined with fog to reduce visibility on both the northbound and southbound lanes.Eighteen people were transported to Shands Hospital emergency room, six of them to a trauma center for people in critical condition, according to hospital spokeswoman Alison Wilson.By Sunday evening, nine of the people treated in the emergency room had been released.

“It’s tragic. It’s probably the worst one (accident) I’ve seen in 27 years,” Florida Highway Patrol spokesman Patrick Riordan told Reuters.Riordan said investigators are still trying to determine how many separate collisions occurred on the interstate, which is a main artery through Florida.In one crash, two cars and a tractor trailer caught fire and melted asphalt on the road, Riordan said.

Gainesville is home to Florida’s flagship university, the University of Florida. The marsh fire was in or near Paynes Prairie Preserve State Park south of town.Florida Forest Service investigators are trying to determine whether the fire was set intentionally, Ludie Bond, a spokeswoman for the service, told Reuters. A lack of rain in recent months meant the fire spread quickly through the parched prairie. – Yahoonews

Iran vows to stop “some” oil sales as inspectors visit

Iran vows to stop "some" oil sales as inspectors visit