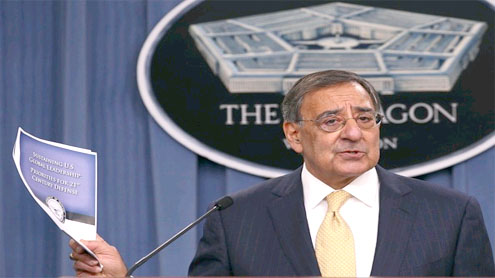 Islamabad: Pakistan has not yet decided whether to try a Pakistani doctor for high treason for assisting the United States in gathering intelligence ahead of the raid on Osama bin Laden’s compound, a senior Pakistani government official said Monday.

“It’s the federal government who will decide whether to try the doctor for high treason or not,” the official said. “At this stage, the decision hasn’t been taken to try the doctor.”The official did not want to be named because of the matter’s sensitivity.Dr. Shakeel Afridi helped the CIA use a vaccination campaign in an attempt to collect DNA samples from residents of bin Laden’s compound in the city of Abbottabad to verify the terror leader’s presence there ahead of the May raid.

In October, a commission recommended treason charges be filed. The official said Monday that the recommendation was non-binding.”A case of conspiracy against the state of Pakistan and high treason is made” against Afridi, Pakistan’s Information Ministry said at the time, summarizing a commission’s investigation into the death of the al Qaeda leader.The senior official said Afridi is under the custody of law enforcement, but he denied he is being held by the nation’s spy agency ISI, or Inter-Services Intelligence Directorate.

The role of the doctor was first reported by the British newspaper, The Guardian, in July.The Guardian said that in the course of gathering intelligence for the raid, the CIA recruited the doctor to run a vaccination program in the area. The goal was to try to obtain DNA evidence from bin Laden family members, the newspaper said, citing unnamed Pakistani and U.S. officials.

Any DNA obtained from the people in the compound could then be compared with a sample from bin Laden’s sister, who died in Boston in 2010, as evidence the family was in the compound, the newspaper said.Neighborhood residents told CNN that two women who appeared to be nurses visited homes and offered free vaccinations.Shazia Bibi said she was vaccinated for hepatitis B in April when two women came to her home near bin Laden’s compound and identified themselves as health workers.

“Whoever gets this vaccination will never get hepatitis B,” Bibi said one of the women told her.Bibi said the health workers spoke in a local dialect and asked for detailed personal information and said a vaccination would not be possible without the information. She said the women were accompanied by a man who stood outside their house.Bibi received one injection. The rest of her family was not at home at that point. She said the women left behind two vaccines but that her relatives refused them. The vaccines are still sitting in her refrigerator, she said.

The Guardian said it isn’t known whether the CIA “managed to obtain any bin Laden DNA, although one source suggested the operation did not succeed.”CIA spokeswoman Jennifer Youngblood declined comment at the time.After the raid, Pakistani officials took into custody several people who were suspected of helping the CIA. The doctor was one of them.Since then, the United States has asked for the doctor’s release and did so again Sunday.U.S. Defense Secretary Leon Panetta acknowledged publicly the key role Afridi played in an interview on CBS’s “60 Minutes.”

“I’m very concerned about what the Pakistanis did with this individual,” Panetta told CBS. “This was an individual who in fact helped provide intelligence that was very helpful with regards to this operation. And he was not in any way treasonous towards Pakistan.””Pakistan and the United States have a common cause here against terrorism, have a common cause against al Qaeda,” Panetta said. “And for them to take this kind of action against somebody who was helping to go after terrorism, I just think is a real mistake on their part.”

Panetta said Pakistan can discipline Afridi in whatever manner it deems appropriate, but the doctor should be released.Panetta also told CBS that he remains convinced that someone in authority in Pakistan knew that bin Laden was hiding in Abbottabad, a largely military community outside the capital, Islamabad.He said there were intelligence reports of Pakistani helicopters passing over the bin Laden compound. He also questioned why the Pakistanis would not notice the vast complex with 18-foot walls.

“So you would have thought that somebody would have asked the question, ‘What the hell’s going on there?'” Panetta said. “I personally have always felt that somebody must have had some sense of what was happening at this compound.”Panetta said the United States chose not to inform Pakistan of the raid due to security concerns.”We had seen some military helicopters actually going over this compound. And for that reason, it concerned us that, if we, in fact, brought (Pakistan) into it, that they might … give bin Laden a heads up.”

But after the interview aired Sunday, Pentagon Press Secretary George Little said Panetta “has seen no evidence that bin Laden was supported by the Pakistani government or that senior Pakistani officials knew he was hiding in the Abbotabad compound.”Many analysts felt U.S. officials had kept quiet about Afridi so as to not implicate him. On Monday, CNN National Security Analyst Peter Bergen said speaking publicly about the doctor could lead to more problems for him.

“By making it a public matter, he may have increased pressure on the Pakistanis to release this guy,” Bergen said in an appearance on CNN. “That said, the United States prosecutes spies from even friendly powers.”Peter Brookes, a Heritage Foundation fellow and former deputy assistant secretary of state under President George W. Bush, said he was also puzzled by Panetta’s remarks.He said it could put pressure on Pakistan’s government. “But I think things are so bad with the U.S. and Pakistan right now that it’s not going to help at all,” he said. – CNN

Feds: Megaupload files may be deleted this week