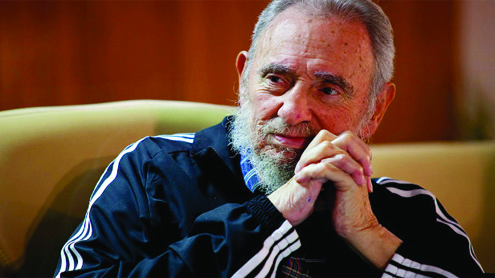 In a six-hour presentation Friday, the leader of the Cuban Revolution and former president was jovial as he spoke about the 1,000-page work, the Granma newspaper reported.Castro, 85, spoke together with a panel of cultural and literary officials at the unveiling of the books.

“They are going to talk to you about two books that you had no idea about,” Castro said, according to Granma.The two volumes, titled “Fidel Castro Ruz: Guerrilla of Time,” is based on conversations with the writer and journalist Katiuska Blanco.The books cover his life from infancy to December 1958, on the eve of victory of the Cuban Revolution.

In photos published online, Castro is seen at the unveiling, wearing a dark blue workout suit over a checkered button-down shirt.A Cuban writer, Graziella Pogolotti, said she encouraged Castro to continue writing, despite the challenges of recalling the past, Granma reported.”I have to take advantage now, because memories fade,” Castro was quoted as saying.”I am willing to do everything possible to share everything I remember well.” – CNN