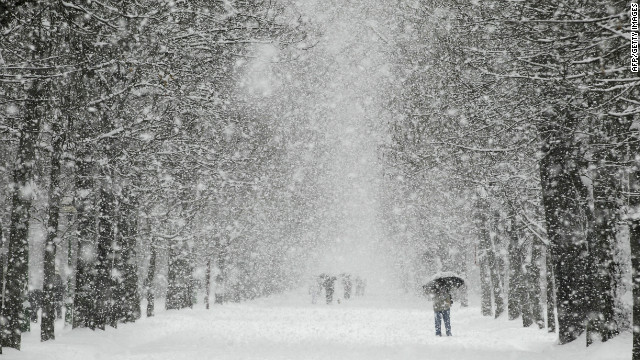 Many of the 32 villages in the Aniene Valley, near Rome, lost electricity on Friday when an electric pylon fell because of the snow, said Piero Moscardini, mayor of Vallinfreda.The valley, home to about 50,000 people, has received some 100 cm (39 inches) of snow, Moscardini said.”It’s the worst snow since 1956,” he said. “The situation is tragic. We need the Army to save us.”Ambulances cannot traverse the roads, he said, and some villagers cannot reach their stables to feed livestock.
Winter whacks Europe

Meanwhile, deaths continued to increase from the cold. In Romania, four people died on Saturday and another six on Sunday, authorities said. A total of 34 people have died since the cold snap began in late January.Nineteen national roads and one highway remained closed on Sunday. More than 30 cities and villages are isolated, authorities said, and power outages were reported in 200 cities and villages. More than 3,000 employees belonging to the Interior Ministry were involved in rescue operations, as hundreds sought refuge in temporary shelters and hundreds more were hospitalized because of hypothermia.
In Poland, TVN Poland said a total of 53 people have died, eight of them in the past 24 hours. The victims are mainly homeless people, according to the report.Heathrow Airport, one of the world’s busiest international airports, canceled about half of its flights Sunday, its owner said Sunday — about 260 more flights than it expected to cancel as of the night before.

Between two and four inches of snow fell on London overnight, as the British capital became the latest European city to be hit by winter weather wending its way west.Drivers in both London and Rome will need to worry about ice as temperatures rise slightly, then fall again to below freezing, CNN meteorologist Tom Sater said Sunday.

Eastern Europe will have a much rougher ride, with temperatures in Moscow plunging far below freezing, and snow sweeping into the continent from the southeast.But Heathrow’s runways were clear as of Sunday afternoon, owner BAA said.It was not immediately clear why more flights were being called off, as Heathrow spokeswoman Alexandra Blomley said the airport’s snow plan “has worked far better than in previous years.”Heathrow and other British airports have been snarled by snow about once a year for each of the past several years.

The airport’s chief operating officer urged travelers to check before coming to the airport so they would not be left stranded there.Normand Boivin said Heathrow “deeply regret any disruption caused to passengers by the cold weather,” but said: “Reducing the flight schedule means we can fly as many people as possible and return the airport to normal as quickly as possible.”The airport did not say how many passengers were affected, but did say it expected to operate a normal flight schedule Monday.

Rome was blanketed in a rare snowfall Saturday.

Landmarks such as Rome’s Colosseum were dusted with snow for the first time since 1985. The rare precipitation caused traffic jams and left some people stranded.Barb Mayer, who lives about 20 miles northeast of Rome, said she woke Saturday to a snowfall “unlike anything I’ve seen since I’ve had my house in Italy.””Our house is out in the country and nobody clears the roads here,” said Mayer, an iReporter who teaches English to business clients in Rome. “Even in Rome, they don’t have the equipment for snow removal since it snows so infrequently.”It usually takes my daughter an hour to drive home (to Palombara-Sabina) from Rome, but last night it took her four hours because of the traffic and the poor road conditions,” she said.

By Sunday, traffic was clearing, a taxi driver said, and temperatures were rising.However, Rome’s Mayor Gianni Alemanno was being criticized for the city’s handling of the weather.Schools and public offices will be closed on Monday, the city said.But Sarajevo, Bosnia, canceled school for a week as the Balkan city was hit by the biggest snowfall since 1999. Snowdrifts that were 110 centimeters (43 inches) high snarled the center of the city, with even more snow in the hills around it.The news was not all bad, said Amina Sofic, a 20-year-old medical student.

“People in Sarajevo like to play in the snow, to ski or board because we have lots of hills. And now that there is no traffic, it’s pretty fun to go on sleds (or) go walking,” said Sofic, a CNN iReporter.Ukraine appears to be the worst affected so far, with Poland, Romania, Serbia and Belarus also suffering much more severe winter conditions than usual.A total of 122 people froze to death in Ukraine since the cold spell started more than a week ago, the state-run news agency Ukrinform reported Saturday, citing government ministries. More than 1,500 people have been hospitalized, it said.

The first reports of heavy snow came from Romania on January 26. Now, although temperatures are becoming more moderate, the snowfall will be very heavy, meteorologists say.Other cold-related deaths have been reported in Serbia elsewhere in the past week. – CNN