by ToP
in Europe, International News
2 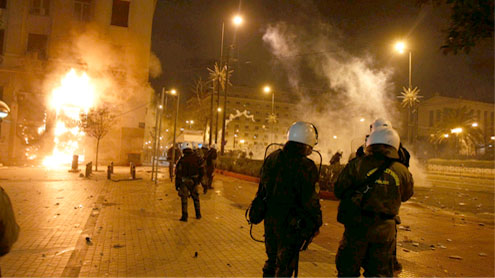 Greece:  Lawmakers in Greece voted early Monday to approve another round of austerity measures, sought in return for a new eurozone bailout of the debt-stricken country, while protests raged in the streets.

As lawmakers debated, police turned tear gas and stun grenades on demonstrators outside Greece’s Parliament. Several buildings, including a bank, cafes and a movie theater, in Athens were set ablaze.Twenty-five protesters and 40 officers were injured in the clashes, which occurred throughout the city, police said. Authorities detained at least 30 people.”They are protesting because they feel that there is no end in their financial suffering. More and more (people) everyday are getting poorer and become homeless in Greece, and especially Athens,” wrote CNN iReporter Thanasis Trompoukis.

The package, which includes deep cuts in government spending, wages and pensions, will help pave the way for eurozone finance ministers to sign off on the new €130 billion ($172.6 billion) bailout deal. It passed Parliament in a 199-74 vote.Greece needs the funds in order to meet €14.5 billion in debt repayments due next month.Speaking before the vote, Prime Minister Lucas Papademos called for calm. “This vandalism, violence, they have no place in a democracy and will not be tolerated,” he told lawmakers, urging them to approve the deal.”At this critical time, we don’t have the luxury of such conflicts,” he said.

Echoing comments he made in a speech to the Cabinet Saturday evening, Papademos warned lawmakers the government would not be able to pay salaries, cover services or import basic goods if the plan was not approved. He spok about the possibility of “catastrophic bankruptcy.””It’s a hard program, a tough program, which also envisages some painful sacrifices,” he said, adding that the plan would put Greece back on “stable ground.”Protesters criticizing the program have demonstrated for days.On Saturday, some isolated scuffles broke out as protesters rallied in Syntagma Square, in front of the Parliament building, but the mood was calmer than a day earlier.

Friday’s protest dispersed after youths smashed pavements and began throwing stones and pieces of marble, as well as Molotov cocktails, at the police, who responded with stun grenades and teargas.Even though the sweeping reform package agreed to by Greece and the so-called troika — made up of the European Commission, European Central Bank and International Monetary Fund — was approved in Parliament, Greek lawmakers must still do more.Jean-Claude Juncker, the prime minister of Luxembourg and head of the Eurogroup, which brings together euro-area finance ministers, said Thursday that other assurances were also needed from Athens before the bailout could be paid out.

Greece’s political leaders must pledge that they will continue to implement the measures after upcoming elections, he said.Athens must also find a further €325 million in “structural expenditure” cuts for 2012, Juncker added.The bailout deal, which would result in significant losses for bondholders, is intended to help reduce Greece’s debts to 120% of Gross Domestic Product by 2020, from about 160% currently

.Greece, which owes some €330 billion, has come close to default before.The nation has struggled to follow through on austerity measures and economic reforms that were a condition of its 2010 bailout package. At the same time, the Greek economy has been in recession for years and many analysts warn that additional austerity could make the situation worse. – CNN