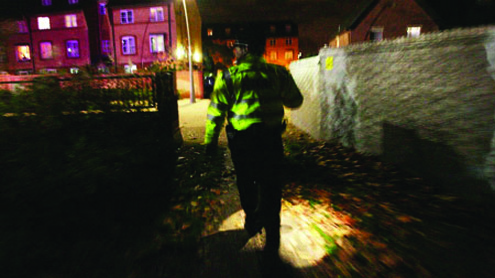 Private companies could take responsibility for investigating crimes, patrolling neighbourhoods and even detaining suspects under a radical privatisation plan being put forward by two of the largest police forces in the country.

West Midlands and Surrey have invited bids from G4S and other major security companies on behalf of all forces across England and Wales to take over the delivery of a wide range of services previously carried out by the police.The contract is the largest on police privatization so far, with a potential value of £1.5bn over seven years, rising to a possible £3.5bn depending on how many other forces get involved.This scale dwarfs the recent £200m contract between Lincolnshire police and G4S, under which half the force’s civilian staff are to join the private security company, which will also build and run a police station for the first time.

The home secretary, Theresa May, who has imposed a 20% cut in Whitehall grants on forces, has said front line policing can be protected by using the private sector to transform services provided to the public, but this is the first clear indication of what that will mean in practice. May said on Thursday that she hoped the “business partnership” program would be in place next spring.A 26-page “commercial in confidence” contract note seen by the Guardian has been sent to potential bidders to run all services that “can be legally delegated to the private sector”. They do not include those that involve the power of arrest and the other duties of a sworn constable.Companies who have applied through the Blue light emergency services e-tendering website have been invited to a “bidders’ conference” on 14 March, with an anticipated contract start date of next February.

The timetable for the program means it will be subject to final sign-off by the first police and crime commissioner for the West Midlands after their election in November. The existing police authority only gave the go-ahead for the tendering stage last month after a “robust and forthright discussion” which ended with a rare 11-5 split vote.The joint West Midlands/Surrey “transformation” program, which has strong backing from the Home Office, looks set to completely redraw the accepted boundaries between public and private and the definition of front line and back-office policing.

The program has the potential to become the main vehicle for outsourcing police services in England and Wales. It has been pioneered by the West Midlands chief constable, Chris Sims, and Mark Rowley, who has just moved to the Metropolitan police from the post of Surrey chief constable. The pair lead on these matters for the Association of Chief Police Officers.The breathtaking list of policing activities up for grabs includes investigating crimes, detaining suspects, developing cases, responding to and investigating incidents, supporting victims and witnesses, managing high-risk individuals, patrolling neighborhoods, managing intelligence, managing engagement with the public, as well as more traditional back-office functions, such as managing forensics, providing legal services, managing the vehicle fleet, finance and human resources.

A West Midlands police authority spokesman said: “Combining with the business sector is aimed at totally transforming the way the force currently does business – improving the service provided to the public.”The areas of service listed in this notice are deliberately broad to allow the force to explore the skills, expertise and solutions a partnership could bring.” He said not all the activities listed would necessarily be included in the final scope of the contract, but if the force added other activities later a “new and costly procurement exercise” would be needed.

The contract notice does state that “bidders should note that not all these activities will necessarily be included in the final scope, and that each police force will select some activities from these areas where they see the best opportunities for transformation”. But the police clearly want to test whether it is possible for new areas of policing to be provided by private companies.The contract is being offered in two lots, one covering custody services and the second all other services. It envisages that only one company will be awarded the main contract, although a second may run custody services separately.

The West Midlands police are already planning to cut 2,764 police jobs over the next three years and this privatization program is not designed to meet the immediate budget gaps. The savings are expected to show after 2014.Ben Priestley, Unison’s national office for police and justice, which covers many police civilian staff, said it was alarmed by the program: “Bringing the private sector into policing is a dangerous experiment with local safety and taxpayers’ money,” he said. “We are urging police authorities not to fall into the trap of thinking the private sector is the answer to the coalition’s cuts. The fact that the Home Office is refusing to publish its business case – even under FOI [the Freedom of Information Act] – speaks for itself.

“Privatization means that the police will be less accountable to the public. And people will no longer be able to go to the Independent Police Complaints Commission if they have a problem. When a critical incident happens, a force’s ability to respond will be severely compromised. The only winners are private companies and shareholders who make profits at the expense of local services.”A number of other forces, including Cleveland, Avon and Somerset, and Cheshire, have been exploring the services that might be offered to the private sector, albeit on a smaller scale.

Cleveland police have a 10-year contract with IT firm Steria to provide call handling, front desk staffing, and aspects of the criminal justice system on top of computer services, finance and training. Reliance security runs Cleveland’s custody suites.Avon and Somerset had a contract with IBM, called South West One, which suffered problems in its first three years. Some services are to be taken back in-house. Cheshire has a more traditional contract with Capgemini to provide finance, facilities and fleet management.There is not expected to be any shortage of bidders. When Lincolnshire put its then groundbreaking contract out to tender last March, 12 companies responded with submissions. – guardian