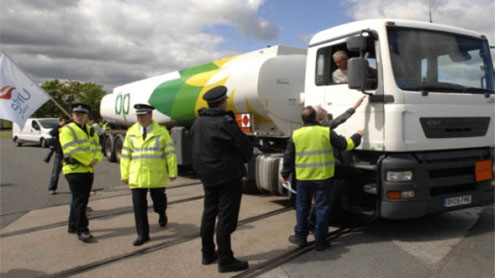 LONDON: The British government laid plans on Tuesday to cope with possible fuel shortages if a strike by tanker drivers goes ahead, lining up the army to help and warning businesses and the public to make preparations.

Truckers voted on Monday to take strike action that union officials said could deplete petrol stocks within two days, against a backdrop of tough austerity measures to tackle a record peacetime public budget gap.Hauliers and farmers protesting high fuel taxes brought much of the country to a standstill in 2000 when they blockaded oil refineries and petrol distribution centers.Anxious to avoid a repeat that could hit an ailing economy and would embarrass the country in the run-up to July’s Olympic Games, the government is drafting contingency plans to deploy the army on Britain’s streets for the first time in almost a decade.

Ministers are considering asking businesses to lend them tankers to be driven by soldiers, who would need eight days’ training to be ready, as well as getting more drivers.“There are discussions ongoing,” a spokeswoman for Prime Minster David Cameron said. “We are looking at all the options as to how we can help resolve this.”.”..A strike and the disruption that would follow is in nobody’s interest, particularly the UK economy.”Britain’s industrial relations were further strained last week by a government budget that phases in cuts in the top rate of tax for the highest earners while the austerity program rumbles on.

Public sector workers, who staged the biggest walkout seen in a generation last year, are still involved in a dispute over proposed changes to their pensions.Even the police, who have are banned by law from taking industrial action are seeking the right to strike over growing discontent with government policies.Britain’s biggest union Unite, which represents the 2,000 fuel tanker drivers, said its drivers supplied 90 percent of Britain’s petrol forecourts and any action could affect 7,900 of the 8,706 filling stations across the UK. Stocks would begin to run dry within 48 hours of any action.

No strike dates have been set yet, with local activists meeting in the next few days to decide the way forward, a Unite spokesman said.In the meantime, the union was urging employers to resume talks and called for ministers to intervene, he added.There was no sign Britons were begin to stockpile fuel and the RMI petrol retailers association said there were only isolated reports of motorists panic-buying but the government warned that the public should be prepared.“People, especially, businesses should look at their contingency plans should there be a dispute,” Cameron’s spokeswoman said. “If there is a strike, and we really want to avoid this, then disruption is inevitable.”

The last time British armed forces were out on the streets was during a firefighters’ strike in 2002/3 when troops drove old military firetenders nicknamed “green goddesses.”Economists said a strike was unlikely to have far-reaching consequences for the fragile economic recovery, but could have some short-term impact.“There’s some talk going around that the tanker drivers’ strike will cause a surge in fuel prices at the pump which will hit real disposable income again … and enhances prospects for an extension of QE in May,” said Eric Wand, fixed income strategist at Lloyds. – Arabnews