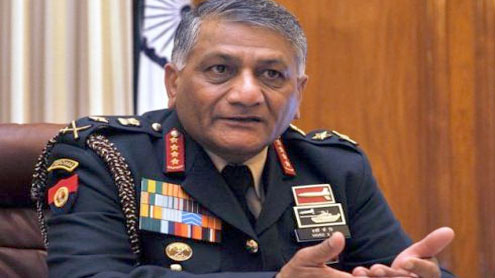 NEW DELHI: Obsolete air defence and a severe shortage of ammunition weaken India’s defence capabilities, the head of the army told the prime minister in a letter leaked on Wednesday, plunging the army’s relations with the government to new lows.

In the letter dated March 12, excerpts of which were printed by the DNA newspaper, Indian Army chief Vijay Kumar Singh said the tank fleet of the world’s second-largest standing army was devoid of ammunition, elite special forces were “woefully short” of essential weapons and air defence was 97 percent obsolete. “The state of the major (fighting) arms – mechanised forces, artillery, air defence, infantry and special forces, as well as the engineers and signals, is indeed alarming,” General Singh wrote in the letter. The infantry is crippled with “deficiencies” and lacks night fighting equipment, he wrote.

In the letter to Prime Minister Manmohan Singh, General Singh reportedly blamed the slow procurement process and lack of urgency among bureaucrats for the “hollowness” of the 1.13-million-strong military.Indian Defence Minister AK Antony confirmed the existence of the letter and said it should not have been made public. Politicians from all parties reacted angrily and some called for the army chief’s resignation if he was found to be behind the leak. “The government is determined to do all that is needed to continue to assure the safety and security of India,” Antony told parliament.

“Publishing secret documents will not help the nation.” “We have equally taken care to speed up the modernisation of the armed forces. By doing that only we can assure national security and we can protect every inch of our motherland,” he told lawmakers. In a rare show of unity, opposition parties rallied around the government, a sign of concerns about the army chief’s habit of challenging his civilian masters. Senior opposition leader Arun Jaitley from the Bharatiya Janata Party (BJP) complained of the “alarming situation” in which “letters which are otherwise intended to be secret and meant to be kept secret find there way into the media”.

“The fact that they can be leaked and come into the public domain itself is a matter of serious concern,” he told parliament. Earlier in the year, General Singh took the Defence Ministry to the Supreme Court after claiming he was a year younger than military records showed. He lost the case. – Dailytimes