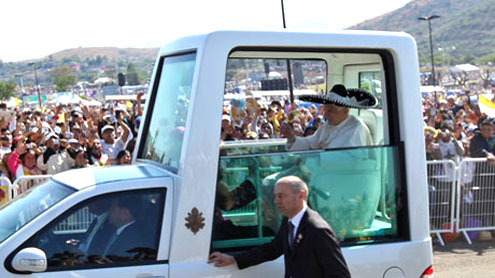 Pope Benedict XVI has criticised the 50-year-old US trade embargo imposed on Cuba, as he ends a visit to the island.

The Pope called for greater rights in Cuba, saying he wanted a society in which no-one was denied basic freedoms.This aim was not helped by economic measures which “unfairly burden” Cuba’s people, he said.Earlier, Pope Benedict met Cuba’s revolutionary leader and former president, Fidel Castro, and celebrated Mass in front of vast crowds in Havana.The Pontiff made his parting comments in the airport in Havana, in the presence of the current president, Raul Castro.

He said all Cubans should be able to share in “forging a society of wide horizons, renewed and reconciled”.”No-one should feel excluded from taking up this exciting search by the limitations of their basic freedoms, or excused from this by indolence or a lack of material resources – a situation which is worsened when restrictive economic measures, imposed from outside the country, unfairly burden its people,” he said.

The US trade embargo, known as the blockade or “el bloqueo” in Spanish, was introduced soon after the 1959 Revolution. It was strengthened in 1962, with the support of Cubans who had fled to the United States, after Fidel Castro’s Cuba nationalised the properties of American citizens and corporations.Earlier, Pope Benedict met the revolutionary leader and former president.The meeting was described by a Vatican spokesman as “animated and cordial”, with the two men even sharing a joke about their ages.According to the spokesman, Federico Lombardi, they discussed Church liturgy and the inability of science to solve all future challenges.

He said Fidel Castro, wearing a track suit, had said he was glad that Pope John Paul II and Mother Teresa of Calcutta had been set on the way to sainthood “because both did a lot for Cuba, especially Mother Teresa, who gave her life for the poorest of the poor”.But it does not appear that the Pope directly raised the political questions that he has been addressing in his sermons.In the main public event of his final day in Cuba on Wednesday, hundreds of thousands of Cubans gathered to see Pope Benedict celebrate an open-air Mass in Havana’s Revolution Square, with President Raul Castro in the front row

In his sermon, the Pope urged Cubans to search for “authentic freedom”.Hours before the service began crowds of worshippers started to arrive in the plaza waving flags to welcome the pontiff.When he arrived the Pope was introduced to chants of “Viva Cuba! Viva el Papa!”One of the many Cubans there, Carlos Herrera, told the Reuters news agency: “I come to hear his words, wise words for Cuban people. That helps us. It gives us unity.”

Others suggested they were only there because they had been told to go by their employers or teachers and left before the sermon began. The Pope’s sermon expanded on the theme that Cuba should build a more open society, based on truth, justice and reconciliation.During the three-day visit some activists have urged greater intervention from the Church to promote human rights.When the Pope visited the eastern city of Santiago, he said he had prayed for “the needs of those who suffer, of those who are deprived of freedom, those who are separated from their loved ones”.

And when he met President Raul Castro, the pontiff pushed for a bigger role for the Church and asked for Good Friday to be made a national holiday.Before he arrived in Cuba, the pontiff had expressed concern that communism “does not correspond with reality” and a belief that Cuba needed to find a new economic model.But he has no plans to meet members of the Cuban opposition, some of whom were barred from leaving their homes ahead of the Pope’s visit. – BBC