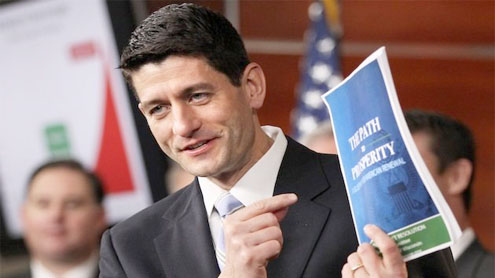 The bill, championed by House Budget Chairman Paul Ryan, R-Wis., is destined for almost sure defeat in the Democrat-led Senate, but its passage in the House will be used by Republicans to contrast the spending priorities of each party.

The projections within the bill are based on the assumption that the federal health care law will be repealed, and while the plan reduces spending, it would still leave federal coffers with a deficit of nearly $800 billion in 2013. The tax code would be changed to reduce the six current tax brackets to just two, with a top rate of 25 percent for high earners and 10 percent for those with lower incomes. The plan would also reduce the corporate tax rate—currently one of the highest in the industrialized world—to 25 percent and eliminate some tax credits and loopholes.

One of the most criticized parts of the proposal would overhaul the nation’s Medicare program by transitioning it toward a voucher system while preserving the current program for those 55 and older.Speaking from the House floor Wednesday, Minority Leader Nancy Pelosi, D-Calif., criticized the bill for trimming government spending for students and overhauling the current Medicare structure.

“For the sake of our seniors, for our families, for our children, for our workers—I urge my colleagues to vote ‘no’ on the Republican plan,” Pelosi said. House Democrats proposed their own budget, which the House shot down.The chamber also rejected a budget proposal based on Obama’s blueprint and proposals introduced by the conservative Republican Study Committee and the liberal Progressive Caucus.All of the Republican presidential candidates have embraced the key parts of the Ryan budget plan, which is sure to be used as a campaign issue in all of the November races. – Yahoonews