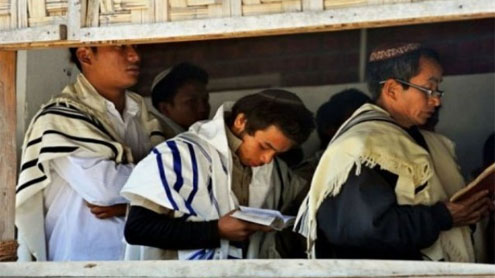 In a synagogue in northeast India, a group of men pray for the chance to “return home” to a country they have never seen and which their ancestors fled nearly 3,000 years ago.

“India is not our country,” says Haniel Reuben, 72, one of the eldest members of a tiny community that claims to have descended from the Manasseh — one of the biblical “lost tribes” of Israel exiled in 720 BC by Assyrian conquerors.“Our forefathers migrated and settled here. Our home is Israel and we will be reunited with our people one day or another,” Reuben said.The Bnei Menashe, as the community is known, comprise around 7,200 members of the Kuki-Chin-Mizo tribe who live in the northeast Indian states of Mizoram and Manipur near the border with Myanmar.

Their oral history tells of a centuries-long exodus through Persia, Afghanistan, Tibet and China, all the while adhering to certain Jewish religious practices, like circumcision.In India they were converted to Christianity by 19th century missionaries and, in reading the bible, recognised stories from their own traditions that convinced them they actually belonged to the Jewish faith. “We are the lost tribe,” insists Reuben, who lives in a ramshackle two-storey wooden home set against a scenic background of the misty, ash-coloured Manipuri foothills.

A lunisolar Jewish calendar hangs on the wall of his living room, while a mezuzah, or parchment, with verses from the Torah is fixed to the front door frame of the house in Manipur’s state capital Imphal. He prays three times a day with his eyes facing west “towards Jerusalem.”The ancestral claims of the Bnei Menashe — rejected by other members of the Kuki-Chin-Mizo — began to draw attention in the 1980s from Jewish organisations dedicated to identifying “lost Jews.”

In the late 1990s, groups of Bnei Menashe were brought to Israel where they formally converted and settled. But the real breakthrough came in 2005 when Israel’s Sephardic Chief Rabbi Shlomo Amar officially recognised the entire community as “descendants of Israel” — a crucial step in securing their “right of return.”

The process was halted by new Israeli government policy in 2007, but last July the Ministerial Committee on Immigration and Absorption, agreed to the return of the remaining 7,200 Bnei Menashe. “It is a huge project,” said Yochanan Phaltual, the Indian representative for Shavei Israel, an Israeli-based organisation that reaches out to descendants of Jews around the world. “It is very complicated as it requires the involvement of all government departments,” Phaltual said.

The head of Shavei Israel, Michael Freund, who has lobbied hard for years on behalf of the Bnei Menashe, said he was confident the immigration would finally happen. “This is simply a bureaucratic process, and like all bureaucratic processes, it takes time,” Freund said in an e-mail. “I hope that we will soon hear good news, and that the Bnei Menashe will be allowed to return to the land of their ancestors.”Living as a tiny minority poses numerous problems for people like Talya Bem, a 45-year-old widow and mother of three, particularly when it comes to observing orthodox customs and rituals. – Dailytimes