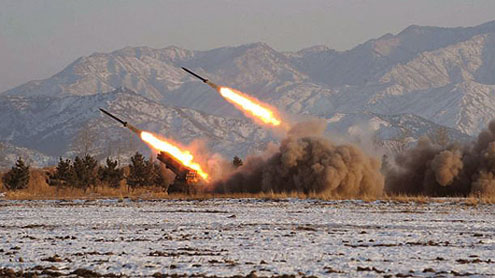 North Korea has raised tensions in recent weeks by announcing it would launch a rocket to put a satellite into orbit, but regional powers are urging Pyongyang to drop the plan, saying it would violate U.N. Security Council resolutions.North Korea launched two short-range missiles believed to be surface-to-ship missiles from its west coast Thursday morning, South Korea’s Chosun Ilbo newspaper quoted government officials as saying.

“The launch is believed to be to upgrade missile capabilities and not related directly to the North’s long-range missile launch,” the newspaper quoted a military official as saying.Another mainstream newspaper JoongAng Ilbo published a similar report.South Korea’s office of the Joint Chiefs of Staff declined to confirm the reports, citing its policy of not speaking publicly on matters involving intelligence activities.

Reclusive North Korea has said it is merely sending a weather satellite into space, but South Korea and the United States say it is a disguised ballistic missile test.The secretive North has twice tested a nuclear device, but experts doubt whether it yet has the ability to miniaturize an atomic bomb to fit inside a warhead.The North has said the launch would take place between April 12 and 16. The planned launch, which has even drawn criticism from ally China, will mark the 100th birth anniversary of state founder Kim Il-sung. – Yahoonews