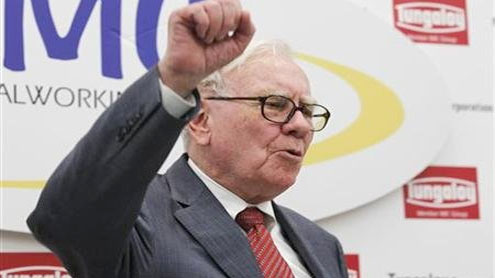 COUNCIL BLUFFS, Iowa: Investor Warren Buffett learned more than economics and thrift as a paper boy during the 1940s when he earned the $5,000 that launched the investments that grew into Berkshire Hathaway Inc.

He also learned how to fold and tightly tuck newspapers into themselves so they wouldn’t fly apart when pitched to porches.Buffett, 81, demonstrated he still had the knack Saturday during a guest appearance at the annual Omaha Press Club Show, which pairs tunes with lyrics that spoof regional events and skewers and roasts newsmakers.

Dressed as a World War II-era street-corner newsboy with a bag of newspapers at his left hip, Buffett folded and tossed copies of the Omaha World-Herald into the crowd of 500 while singing “I’m Only a Paperboy” to the tune of the 1933 song, “It’s Only a Paper Moon:”

“I’m only a paperboy

Just as happy as I can be

‘Cause the money you pay for this

Buffett, chairman of Omaha-based Berkshire Hathaway, bought the employee-owned Omaha World-Herald for $200 million in December. The title of the show on Saturday was “Warren’s Herald.”Buffett’s secretary, Debbie Bosanek, made a cameo appearance as his “underpaid, overtaxed” executive assistant.

Bosanek was thrust into the national spotlight in January when President Barack Obama invited her to the State of the Union address to illustrate concerns that middle-class workers’ wages are taxed at a higher rate than are the dividends and capital gains of the wealthy.Bosanek recited a list of the top five things she planned to spend money on when she lands in Buffett’s lower tax bracket.

Counting down, she said, “A new ribbon for my Smith Corona typewriter,” “a set of earplugs for when Mr. Buffett practices his ukulele,” “an extra scuttle of coal for those cold January days at the office,” “a nice dinner anyplace but Gorat’s or Piccolo Pete’s (Buffett’s two favorite Omaha restaurants),” and “a brand new iMac, so I can stop using those crappy PCs he gets from Bill Gates.”Gates, co-founder and chairman of Microsoft, is a Berkshire Hathaway board member. He and Buffett are bridge-playing pals.

The show, which raises money for journalism scholarships, was held at the Mid-America Center across the Missouri River from Omaha, Nebraska.Buffett’s next appearance on a stage will be in front of 20,000 shareholders from around the world during Berkshire Hathaway’s annual meeting May 5 in Omaha. – Yahoonews