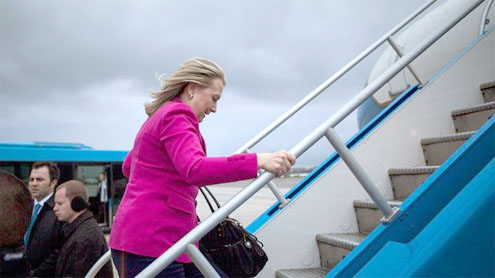 ISTANBUL: US Secretary of State Hillary Rodham Clinton on Sunday urged Iran to back up its declaration that Islam bars weapons of mass destruction by agreeing to a plan that would prove it does not intend to develop nuclear arms.

“We are meeting with the Iranians to discuss how to translate what is a stated belief into a plan of action,” she said. “It is not an abstract belief, but a government policy. That government policy can be demonstrated in a number of ways. … The international community now wants to see actions associated with that statement of belief.”She mentioned opening Iran’s nuclear facilities to international inspectors and shipping out some of Iran’s enriched uranium in exchange for fuel for its research reactor.Washington and its allies see Iran’s nuclear program as designed to develop an atomic bomb. Tehran says the program is for peaceful energy and research purposes.

The upcoming talks, which Clinton said would not be “an open-ended session,” have taken on fresh urgency amid speculation that Israel or the US could take military action later this year. Clinton has made clear that time is running out for diplomacy.Khamenei, who has the final say on all state matters, issued a religious decree in 2005 declaring nuclear weapons as “haram” or forbidden. The US and its allies discount Iran’s claims.Clinton noted that the Turkish officials had “lengthy discussions” with Iranian officials. But the US and Turkey, a NATO ally, haven’t seen eye to eye on the Iranian threat.

Erdogan has built close economic ties with Iran and has tried to act as a go-between on the nuclear program, breaking ranks with world powers in 2010 by attempting to find a separate settlement with Tehran. The international talks have included the US, Britain, France, Germany, Russia and China.

Erdogan’s comments upon returning from Tehran suggested further distancing from US and European positions, repeating Khamenei’s verdict on weapons of mass destruction.“After such a statement from such a person, I cannot claim that Iran is building a nuclear weapon,” the Turkish leader said. “Does it not have the right to implement a nuclear program for peaceful means? – Arabnews