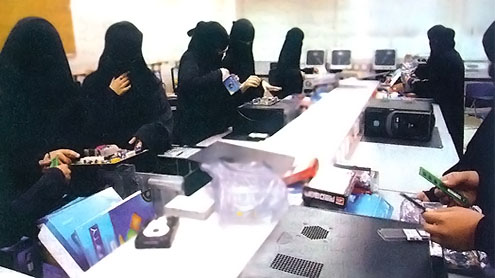 Princess Hessa bint Salman underscored the significance of various government and private organizations in fulfilling their social responsibility by ensuring the participation of women in the development of national industries.

She also highlighted the participation of government sectors in boosting the industrial role played by the Technical and Vocational Training Corporation (TVTC) for girls.Princess Hessa was attending a ceremony where an agreement to establish the women’s wing of the Military Clothes and Supplies Factory in the western region was signed. The agreement was signed between TVTC and the Ministry of Defense, which is represented by the Military Industries Organization.

Speaking on the occasion, Munira Al-Aloula, deputy governor of TVTC for Girls, thanked Princess Hessa for agreeing to serve as honorary chairperson of the new factory project, which will be built on an area covering 1,200 square meters.Princess Hessa said: “This honorary chairmanship will increase awareness of my responsibility to become a servant of this nation.”The princess noted Saudi women have to play a key role in the Kingdom’s industrial growth. She stressed the society should realize a man or woman with innovative ideas and vocational skills has as much importance as that of an academic.

“No civilization will flourish without industries. The new project will support the nation, and the entry of women to this sector is good news as they are partners of men,” she said.Princess Hessa underlined the need for strengthening cooperation between various sectors such as the ministries of health and social affairs as well as the Saudi Commission for Tourism & Antiquities (SCTA) in activating their social responsibility role by ensuring the participation of women in the Kingdom’s industrial growth.

She noted the initiative for starting the women’s section of the Military Clothes and Supplies Factory was first mooted by TVTC Governor Ali Al-Ghafis during the time of the late Crown Prince Sultan, who was also minister of defense. “The project later received support from Minister of Defense Prince Salman and accordingly the agreement was signed. Now, we are reaping its fruits under the supervision of TVTC Deputy Governor Munira Al-Aloula,” she said.

While commending the robust industrial growth in the Kingdom, Princess Hessa said: “We have now entered a new phase where men and women work at the same time. Women are capable of doing industrial work in compliance with our religious traditions and customs,” she said, while noting there are several women who have the capacity and skills to perform such duties that were not evident earlier.

During a video presentation about the activities of the new factory project, it was disclosed that the initiative, which would have nine production lines, would be managed fully by Saudi women. These include the production of underclothes, berets, office uniforms, military jackets and pants. – Arabnews