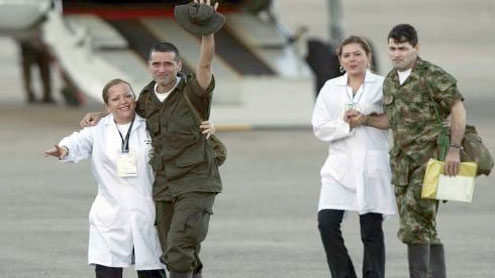 The captives were collected from the jungle by a Brazilian military helicopter and flown to safety.They were welcomed by their relatives at the city of Villavicencio and given medical checks before being flown on to the capital, Bogota.President Juan Manuel Santos welcomed the releases but said the gesture by the Farc was “not enough”.Television pictures showed the former hostages waving and punching the air as they got off the helicopter at Villavicencio.

All had been held for more than a decade after being captured in combat by the insurgent group. “Welcome to liberty, soldiers and policemen of Colombia,” Mr Santos said at the presidential palace.”Freedom has been very delayed but now it is yours, to the delight of the whole country.”But he said the releases and the Farc’s promise to stop kidnapping for ransom were “not enough” and that the hundreds of civilians still being believed to be held must also be freed.

“The country and the world demand the release of all the hostages,” he said, adding that his government would continue its policy of confronting armed groups.”When the government believes there are enough guarantees to begin a process that leads to the end of the conflict, the country will know it,” he said.The hostage release was co-ordinated by the International Committee of the Red Cross (ICRC) and a group of Colombian mediators led by former senator Piedad Cordoba.

“We express our great happiness at the success of this operation that allowed in just one day the reunion of ten families that were waiting for so many years,” the head of the ICRC in Colombia, Jordi Raich, said. The Revolutionary Armed Forces of Colombia (Farc) have been fighting for power in Colombia since the 1960s.But over the past decade they have suffered a series of setbacks, losing several top commanders and much of their strength.For many years the rebels tried to use captured members of the security forces as bargaining tools to try to secure the release of jailed guerrillas.After drug trafficking, kidnapping for ransom has been the group’s main source of income, but it has drawn national and international condemnation. In February, the Farc promised to end the practice. -BBC