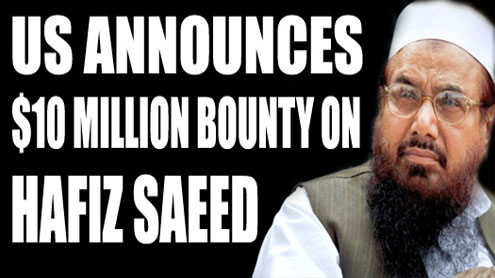 LAHORE: Hafiz Saeed, the leader of a banned group, has demanded proof after the US announced a $10m bounty on his head.

In an exclusive interview to Al Jazeera, Hafiz Saeed said the US move was prompted by the fact that he had been organising rallies against the reopening of supply lines through Pakistan to Nato forces in Afghanistan.“We are not hiding in caves for bounties to be set on finding us. I think the US is frustrated because we are taking out countrywide protests against the resumption of Nato supplies and drone strikes,” Saeed said. “I believe either the US has very little knowledge and is basing its decisions on wrong information being provided by India or they are just frustrated”.

Wendy Sherman, the US undersecretary of state, on a visit to India, said a $3m bounty had also been announced for Abul Rehman Makki, the brother-in-law of Hafiz Saeed. Agencies add: The bounties were posted on the US State Department Rewards for Justice website late Monday, the US Embassy in Islamabad said on Tuesday.“Saeed is suspected of masterminding numerous terrorist attacks, including the 2008 Mumbai attacks, which resulted in the deaths of 166 people, including six American citizens,” the page said.

Ajmal Kasab, the only surviving gunman involved in the three-day rampage in November 2008, has been sentenced to death by an Indian court.Kasab accused Hafiz Saeed of organising the attack, which involved 10 gunmen, 9 of whom were killed during the shootout. The US announcement comes as Asif Ali Zardari, Pakistan’s president, is due to visit India for the first time since the attacks in Mumbai.The money offered for information leading to Saeed’s arrest and conviction is the same as the sum offered by the US for the Afghan Taliban supreme leader Mullah Omar. Only Al-Qaeda leader Ayman al-Zawahiri commands a larger bounty – $25 million.

Hafiz Saeed is head of the banned charity Jamaat-ud-Dawa, seen as a front for Lashkar-e-Taiba, and on March 27 he addressed thousands of people at a rally in Islamabad urging Pakistan not to reopen its Afghan border to Nato and US supply convoys.The Pakistani foreign ministry said it had no immediate comment to make on the US announcement, while the government in New Delhi welcomed the move, saying it reflected the commitment of India and the United States to bring the perpetrators of the Mumbai attacks to justice.

“It also sends a strong signal to Lashkar-e-Taiba as also its members and patrons that the international community remains united in combating terrorism,” Indian External Affairs Minister SM Krishna told reporters in New Delhi.Asserting that there was enough material to detain and interrogate Hafiz Saeed and that Pakistan was not “doing its duty”, Home Minister P Chidambaram said US decision should prod Pakistan in taking action against him. “Pakistan can’t go through with this farce of a trial,” he said.Chidambaram said the US decision will also help India in sharing information on Hafiz Saeed and JuD with the American authorities.

Dawa gave a defiant response, condemning the US move and saying it was made to “please India”.“Hafiz Saeed is not a fugitive, he is not on the run, he is not living in caves, he has not committed any crime and the court has declared him an innocent person,” Hafiz Muhammad Masood, the group’s central information secretary told AFP by telephone from Lahore.“He is continuing his activities and the bounty announcement will not affect them.”

Pakistan put Hafiz Saeed under house arrest a month after the Mumbai attacks. But he was freed in 2009, and in 2010 the Supreme Court upheld his release on the grounds that there was insufficient evidence to detain him.Analyst Imtiaz Gul said previous unsuccessful legal action against Hafiz Saeed made it difficult to detain him again.“Arrest him on what grounds? The mere fact that the US says something may not necessarily relate in a legal case against somebody,” he told AFP.

“There has to be some sort of evidence that you can prove in a court of law.”Dawa, which is one of Pakistan’s biggest charities and known across the country for its relief work after a 2005 earthquake in Kashmir, has long denied all terror accusations.However, both LeT and Dawa are blacklisted by the US government as foreign terrorist organisations.News of the bounty comes as Washington and Islamabad seek to repair their fractious relationship, which has been hit by a series of crises over the past year.

Our Staff Reporter from Attock adds: Ameer Jamaat-ud-Dawa (JuD) Professor Hafiz Muhammad Saeed has said the US and its allies are trying to hold Pakistan responsible for the worst defeat they are facing in Afghanistan.Addressing JuD activists here on Tuesday he said during the last 10 years, the US had lost all their hopes and now wanted to make Pakistan an escape goat.“The solution to all our problems lies in following the golden principles of Islam,” Saeed said.

“Pakistan has been a frontline ally of US for the last 30 years but now, after facing defeat in Afghanistan, it wants to deploy its troops in Balochistan,” he said. He said communism had failed and now capitalism was on the last stage of its collapse, a scenario that was a great embarrassment to Europe.“Jews and anti-Islam lobbies consider Pakistan, being an atomic power, as a hurdle in their way,” Saeed said.

Saeed was of the view that it was the high time for all parties of Pakistan to get united for its prosperity. “If allied forces are planning to quit Afghanistan, why they are asking for restoration of Nato supplies,” he posed a question. He said the parliament was committing greater mistakes than those made by Musharraf as his agreements with the US were verbal but the incumbent parliament was trying to put these agreements in black and white.

“Nato supply, if restored, will further deteriorate the situation in Pakistan,” he warned. He said IMF was trying to make Pakistan a failed state and, to achieve its nefarious designs, price hike and power crises were being used as the weapons.

“Americans neither have trust in our Army nor any politician,” Saeed said. The JuD ameer said US wanted to get control of Pakistan at all costs and the JuD had launched a campaign to make people cognisant of these nefarious designs and the conspiracies. He criticised the present government for declaring India the most favoured nation for trade and warned if trade with India was promoted it would prove disastrous for country’s industry and thousands of labourers would become jobless. He also opposed govt plans regarding purchase of electricity from India.

Saeed hoped that after the retreat of Nato forces, Gawadar Port would become centre of the world trade activities and Pakistan would emerge as an economic power in the region. He emphasised upon all the parties specially PML factions to get united, as it was the only resolution to the problems faced by Pakistan. – Nation