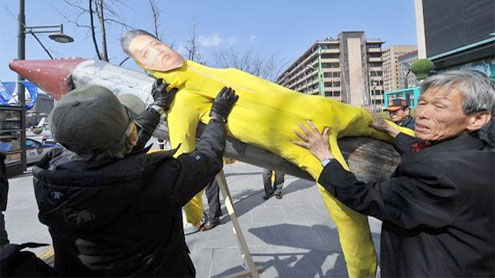 Missile Capable of Striking Continental US

Analysts estimate the weapon to be around 130 feet long and, equipped with a more powerful booster unit, capable of delivering a warhead more than 6,200 miles.Unveiling the missile will raise new fears in neighbouring countries, already alarmed by Pyongyang’s insistence that it will go ahead with the launch in mid-April of a rocket to put a satellite into orbit.

Washington, Seoul and Tokyo believe the launch is a covert test launch of a missile.Analysis of the rocket, which is being prepared for launch at the new Tongchang-ri aerospace facility in the far north-west of the country, indicates that at 105 feet long it is identical in length to the Taepodong-2 missile that was fired in April 2009 and, with a range of 4,163 miles, is the most potent missile in the North Korean armoury at present. South Korean and US officials said they believe Pyongyang wants to show the new missile off at the military parade scheduled for April 15 to mark the 100th anniversary of the birthday of the founder of the nation, Kim Il-sung, or on April 25th, which marks the founding of the North Korean army.

The government sources said they were unable to determine whether the weapon is functional or “a life-size mock-up” at present.Tokyo is taking the threat posed by the planned launch of the North Korean rocket, announced for between April 12 and 16, seriously and is sending 450 troops to the southern island of Ishigaki to man Patriot Advanced Capability-3 interceptor missiles.The Japanese government has stated that it will shoot down the rocket if it threatens Japanese territory.Tokyo is also deploying state-of-the-art Aegis warships in the East China Sea to monitor the launch. The vessels will be protected by F-15 fighters. – .Telegraph