One Killed and Four Hurt in Crane Collapse on West Side 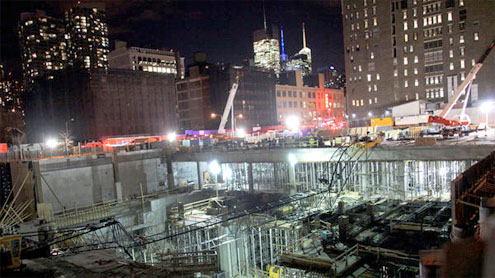 Crane Collapse on West Side

A 170-foot crane at a construction site for the extension of the No. 7 subway line collapsed on Tuesday night in Manhattan, killing one worker and injuring four other people in an eerie reminder of two fatal crane accidents in the city four years ago.

It appeared that the accident occurred when the upper section of the crane broke off just before 7:30 p.m., during work on the extension at 34th Street, between 10th and 11th Avenues. A Fire Department spokesman said an 80-foot section and a 40-foot section from the crane fell.It came down “like a dinosaur,” said a worker from the construction site who was waiting at Bellevue Hospital Center, where at least one victim was being treated.One city official said there was some speculation among investigators at the scene that something in the back of the crane had snapped, causing it to become unbalanced.

“They’re looking at some kind of failure in the rear of the crane,” said the official, who spoke only on the condition of anonymity.Paul J. Browne, the Police Department’s chief spokesman, said a 30-year-old man had died and a 48-year-old man had been injured in the leg.The three other victims were a crane operator, a flag man and a relative of one of the victims, said Jackie Sullivan, deputy chief of the city’s Emergency Medical Services.

A man at Bellevue who said he knew and had worked with the man who died said the victim was a hard worker and “good-natured.” That man, who was with another man who said he was the victim’s father, refused to provide his name. “It was a freak accident,” he added.The damage from the accident appeared to be limited to the construction site, Mr. Browne said, with no reports of damage from nearby buildings and no debris on the street.

It was unclear where the victims had been when the accident occurred, though the city official said two workers, including the man who died, were trapped in the collapse. Some were rescued from about 60 feet below ground, another official said. The Fire Department and the police said they had used ropes to lift them.“It was a complicated job,” said Chief William Seelig of the Fire Department.Mr. Seelig said that members of the department were told that a cable had snapped.

Mr. Sullivan said that the rescue scene was a “very precarious area with a lot of construction material.”Thomas Ruskin, a retired city police detective, said that shortly after the accident, he peered over a wall separating the construction site from the street and saw two victims being removed from the scene. One of them seemed to be in serious condition, and the other appeared to be in critical condition, he said.Emergency workers were “performing C.P.R. on one victim,” he said.

Another man on the scene seemed to be receiving treatment for emotional distress or hyperventilation, Mr. Ruskin said. “The top part of the crane was lying on the upper part of the construction project,” he said. “Something cracked that steel arm,” he added.Joseph F. Bruno, the commissioner of the city’s Office of Emergency Management, said it was unclear who owned the crane. Deputy Police Chief James McNamara said that detectives were interviewing workers and that there was no indication of criminality.

Delia Shumway, the Department of Buildings executive director of cranes and derricks, said: “We understand a 170-foot boom collapsed. We don’t know the cause.”“On behalf of the entire M.T.A., we pray for the recovery of the workers injured as a result of this tragic accident tonight,” the Metropolitan Transportation Authority said in a statement. “We will work together with all proper authorities to conduct a thorough investigation.”Tuesday’s accident came on the same day that the head of the M.T.A. raised doubts that the Bloomberg administration’s plan to extend the No. 7 subway line into New Jersey would materialize “in our lifetime.” The authority’s chairman, Joseph J. Lhota, said the proposal was too expensive.

In 2008, nine people died in two separate crane accidents in Manhattan. The first, which occurred in March, killed seven people and led to the resignation of Patricia J. Lancaster, the chief of the city’s Department of Buildings, who was criticized for approving the project, which did not conform to zoning rules.In May of that year, two more people were killed in a crane accident on East 91st Street, which led to tougher regulations for crane projects. The new rules required that plans be filed before any crane was erected or dismantled and that crane operators complete 30 hours of training with an eight-hour refresher course every three years.The collapses led to a number of criminal trials, including a manslaughter case now under way against the owner of the crane at the 91st Street site. – NYtimes