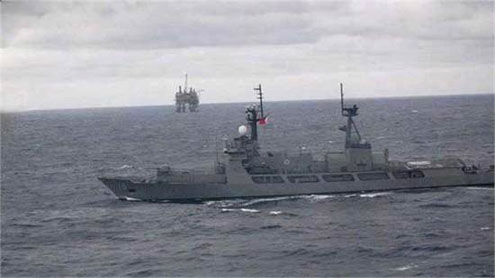 BEIJING: India will pay a heavy price for exploring oil in the disputed areas of South China Sea, said a leading Chinese official a day after China lost political round on the issue at the Asean summit that ended in Cambodia on Wednesday.

“China will not stand any joint cooperation in our claimed maritime areas,” said Wu Shicun, president of the government-run National Institute of South China. Wu was referring to joint exploration project by ONGC-Videsh and a Vietnamese oil company in South China Sea.Beijing had lobbied hard to block discussion on the South China Sea dispute at the Asean summit but it failed to keep the dispute out of the agenda. Three Asean members – Vietnam, Malaysia and Philippines – are in a bitter dispute over the ownership of the 52 islands in South China Sea.

“There are a lot of economic and political risks” for the Indian oil company, Wu said. The Indian company involved in exploring oil in the disputed area should do a proper cost benefit analysis, he said. About 40% of the area in the two offshore blocks under exploration by India falls in the disputed zone, he said.

Wu, who advises the Chinese government on the South China Sea dispute, said India and Japan should “play a positive role in pushing for settlement” of the problem. The Chinese government will not dilute its claims over the disputed islands because “nationalism prevails strongly in China,” he said.China directly controls only seven of the 52 islands in the Spratly Islands area of the sea. But it claims ownership of 90% of the area. Vietnam has control over 40 of the islands, Philippines controls nine, Malaysia has five and Taiwan control one island. – TOI