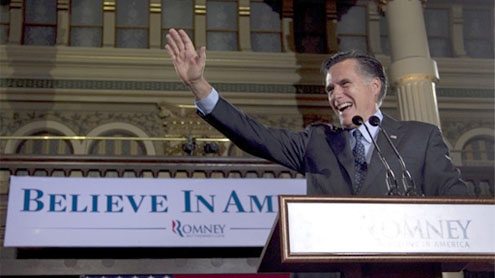 Mitt Romney took a sharper line of attack against President Obama on Wednesday, accusing the Democratic incumbent of waging a “hide-and-seek campaign” that disguises his intentions and offers no solutions for the country’s most intransigent economic problems.

Romney’s comments to the American Society of News Editors in Washington were a forceful rebuttal of the criticism that Obama had lodged against him before the same audience a day earlier, when the president described the GOP as a “radical” party that had strayed from American values.Obama “came here yesterday and railed against arguments no one is making, and criticized policies no one is proposing. It’s one of his favorite strategies — setting up a straw man to distract us from his record,” the former Massachusetts governor told the editors and reporters.

Romney’s aggressive tack against Obama reflected his bolstered confidence, after sweeping the presidential primaries in three states on Tuesday, that he is moving beyond the prolonged and bitter struggle for the Republican nomination and can focus fully on his November opponent.Taken together, the speeches by Obama and Romney represented the most direct engagement yet between the two all-but-certain standard-bearers and a signal of the contrast they plan to present to voters this fall.

Obama’s message is evolving into a populist appeal that seeks to paint Romney and the Republicans as extreme and out of touch with middle-class concerns. Romney is honing a portrayal of Obama and the Democrats as hapless believers in big government who have neither the expertise nor the vision to get the economy back on its feet.“We know what Barack Obama’s vision of America is,” Romney said. “We’ve all lived it these last three years.”

Obama on Tuesday was unstinting in his castigation of the House Republican budget as “a Trojan horse” that would “impose a radical vision on our country” and as “thinly veiled social Darwinism.” Romney has endorsed the fiscal blueprint, which was authored by Budget Committee Chairman Paul Ryan (R-Wis.) and passed by the House last week.“I looked at what the president said,” Romney said Wednesday. “There were just so many things that I found to be distortions and inaccuracies.”

Among Obama’s untrue assertions, Romney said, was that the $5.3 trillion in cuts the budget plan envisions over the next decade would be applied equally to all programs.“Of course you wouldn’t cut programs on a proportional basis. There would be some programs that you would eliminate outright — Obamacare being first on the list,” Romney said.Obama’s ‘true position’ As he has before, Romney pointed to the president’s comments to Russian President Dmitry Medvedev — caught at a moment last month when Obama was unaware that his microphone was on — that he would have “more flexibility” after the presidential election, which will be his last.

“President Obama’s exchange with the Russian president raises all sorts of serious questions,” Romney said. “What exactly does President Obama intend to do differently once he’s no longer accountable to the voters? Why does flexibility with foreign leaders require less accountability to the American people? And on what other issues will he state his true position only after the election is over?” – WP

Yahoo confirms layoff of 2,000 employees in bid to renew company

Yahoo confirms layoff of 2,000 employees in bid to renew company